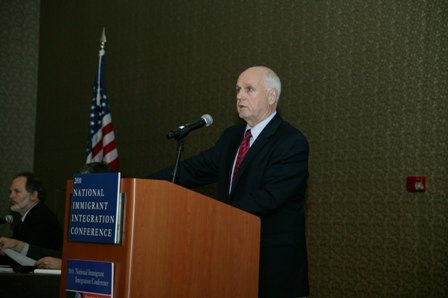 The story that Kevin McCarthy told at the National Immigrant Integration Conference (NIIC) on September 30, is one that is familiar to most Dunkin’ Donuts franchise owners, particularly those who have been in the system for a while. It is their story – how hard working immigrants could build something for themselves, their families and for the company that gave them the opportunity.

McCarthy was invited to speak at the conference co-chair, Westy Egmont. “I specifically sought out the Dunkin’ franchisees rather than someone from the corporation because the real story of Dunkin’ Donuts’ success is its labor,” said Egmont. “Dunkin’s biggest story is the entrepreneurial nature of its immigrants – not its market capitalization.”

“There were a lot of people, including Massachusetts Governor Deval Patrick, who didn’t know that immigrants built Dunkin’ Donuts into the company it became,” said McCarthy, Chairman of the DDIFO’s Board of Directors and former Vice President of Development and Operations for Dunkin’ Donuts. “The franchisees don’t get enough credit.”

The immigrants who helped Dunkin’ Donuts into the iconic brand it is today primarily came from two distinct areas: the island of Sao Miguel in the Azores and the South Asian countries of India and Pakistan. This history was chronicled in a 2009 article for Independent Joe magazine titled, “East Meets West.”

In that article author Judy Rakowsky wrote, “Globally from East to West, hardships ranging from war to barren economic landscapes often motivated the future franchisees to leave their native towns to seek safety and better opportunities for themselves and their families.  And the Dunkin’ Donuts franchise rewarded hard work and teamwork even as it offered extended families and immigrant networks a foothold in a new land and a launch pad for their American dreams.”

The 2010 NIIC Conference was held at the Westin Boston Waterfront Hotel and brought together leaders from government, education, business and the nonprofit sector. According to Egmont the conference aims to get these leaders working together to assess the economic impact of immigrants, their contributions to the country and the ways that the naturalization rate can be improved. There are over 34 million legal immigrants in the United States.

In his speech to the NIIC, McCarthy touched on four major characteristics endemic to the early immigrants who joined the Dunkin’ system:

“Because the immigrants who joined with [Dunkin’ Donuts founder] Bill Rosenberg in the early years were hard workers who knew how to save and reinvest their equity, Dunkin’ was reinvigorated during the difficult economic years of the mid 1970’s and early 1980’s,” said McCarthy.

He pointed out the Portuguese immigrants who built the northeast region created a gold standard for franchise operations and that was continued by the South Asian immigrants who bought heavily into Dunkin’ when it expanded to the Midwest.

What helped the system further develop, McCarthy says, was the next generation who came into the family business with more formal education as well as a willingness to build upon their father’s hard work.

Speaking at the conference, Governor Patrick noted that 61% of all new businesses in created in Massachusetts in 2008 were started by immigrants. Experts believe the future evolution of the U.S. economy will be influenced by immigrants starting new ventures.

According to McCarthy, the entrepreneurial spirit displayed by Dunkin’ Donuts’ original franchise owners is still a model to follow for future generations of immigrants.