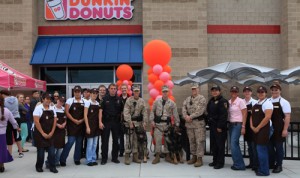 Serving coffee and donuts to the U.S. military is soon going to become a lot more expensive for Dunkin’ franchise owners thanks to a looming wage hike ordered up by the federal government.

Operators of quick service restaurants located on military bases, including Dunkin’ Donuts, face a jump in the minimum wage to $10.10 an hour starting January 1, 2015—up from $7.25 now.

That has some Dunkin’ franchise owners looking carefully at their bottom lines and questioning how they will be able to afford this increase to what is already one of their largest expenses, labor.

“Right now, no one is getting rich,” mused one Dunkin’s franchise owner doing business on a base, who declined to be named. “It’s basically transferring money from one group of pockets to another.”

The pending increase comes as a result of an executive order issued earlier this year by President Obama boosting the minimum wage for all companies with federal contracts, including restaurants serving personnel on military installations.

That, plus other newly mandated fringe benefits will bring the wage to just over $11 an hour, a boost of more than 50 percent.

In fact, some franchise owners in other quick service chains have decided enough is enough and are now closing up shop.

Three McDonald’s franchises on bases in South Carolina, Washington state and Maryland recently announced plans to shut their doors, according to the Military Times.

Franchise owners doing business on bases are in a double bind: on the hook for the increased wages but prohibited from raising prices in order to cover the higher costs as a result of federal price controls aimed at protecting service members.

“Anywhere else in the world you would be able to adjust your additional costs,” says the unnamed franchisee. “You are not going to be able to change your prices.”

Senate Republicans have taken up the cause, grilling U.S. Secretary of Labor Thomas Perez at a recent hearing.

“When these inflated wage and benefit requirements are combined with the food pricing restrictions found in most service contracts, many may be unable to remain profitable,” a group of labor committee members, led by Senator U.S. Senator Lamar Alexander (R-Tenn.), wrote to Perez.

The wage increase comes even as Dunkin’ owners, both on bases and off, are bracing for a looming health care hit as well.

Under the Affordable Care Act, business owners with over 100 employees are on the hook for picking up their employees’ medical bills come January 1, 2015. That threshold will then drop to 50 employees a year later.