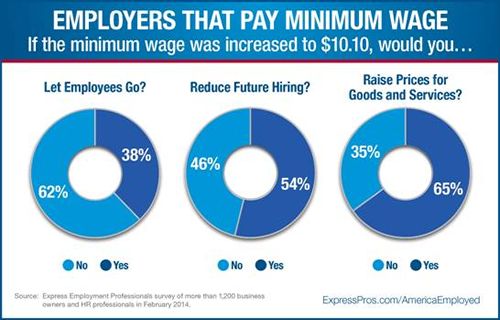 With talk of increases to the federal minimum wage as well as a host of individual states (and cities) continuing uninterrupted, Express Employment Professionals this week released a survey on the impact of minimum wage increases on small business.  The report showed that in the face of a minimum wage increase to $10.10/hour (the current amount being pushed by President Obama), 38% of those employers currently paying the minimum would lay some of their employees off.  Another 54% reported that they would cut back on their hiring plans while 65% would take the approach of raising the price on their goods and services. When all employers were included regardless of whether they paid the minimum or higher wages, the impact was 19% would lay off workers, 39% would reduce future hiring, and 51% would look to raise their pricing.