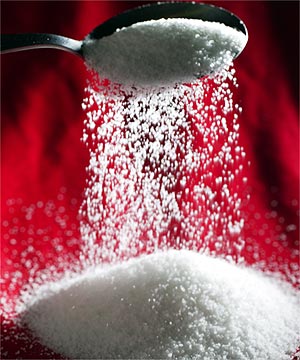 Production shortages have seen the cost of sugar nearly triple in the last year, flirting with 30 cents US per pound in comparison to the 11 cents at which it formerly hovered. Analysts predict things will get worse before they get better, with potential price implications for everything from donuts to candy bars.

Misty Harris in Canwest News Service writes that Canadians with a sweet tooth may soon find cavities in their wallets as sugar prices soar to their highest level in three decades.

Production shortages have seen the cost of sugar nearly triple in the last year, flirting with 30 cents U.S. per pound in comparison to the 11 cents at which it formerly hovered. Analysts predict things will get worse before they get better, with potential price implications for everything from cupcakes to double-doubles.

“I think we’ll be going through most of 2010 at abnormally high levels,” says Edward Makin, president and CEO of Lantic, which represents more than half of Canadian sugar sales. “The 30-cents level we touched last week was probably justified, and we’ll likely go even higher.”

Sandra Marsden, president of the Canadian Sugar Institute says long-term contracts have helped limit the exposure of many retailers and food processors to the latest sugar swings. But until the predicted return to surplus in 2011, individual manufacturers and smaller businesses will have to either hold the line at lower profits or start passing costs along to consumers.

If prices stay as high as they are now — or worse, climb higher — Lantic’s Makin says companies of every size will face that same decision.

“With things like this, you’re best to keep your head down and hope it all goes away. But I don’t think it’s going to do that any time soon,” says Makin, noting that he wouldn’t be surprised to see sugar trading in the mid-thirties over the next several months.

Already, the price of bags of sugar at grocery stores has risen with the fall in production, which was caused by unfavourable weather in India and Brazil. And across the country, bakeries — many still recovering from the record wheat prices of recent years — are preparing to raise the price of their goods.

“We’re definitely at the point where we have to increase prices by five to 10 per cent,” says Lori Joyce, co-founder of the Cupcakes franchise in British Columbia. Although the bakery chain won’t implement changes until after the Olympics, the fear that Canadians will presume price-gouging still looms large.

“I’m really nervous,” says Joyce. “The consumer just thinks retailers are getting greedy . . . This (situation) forces us to look like the bad guy.”

Even an organization as embedded as Tim Hortons isn’t immune to sugar shock, with coffee and doughnuts having been subjected to price increases of about five cents each late last year.

“High sugar prices have increased the cost of business for our local franchisees. In fact, franchisees have been hit from several directions, dealing with increased labour costs and commodities, such as coffee and dairy products,” says David Morelli, director of public affairs for Tim Hortons.

For competitive reasons, the company isn’t tipping its hand to this year’s pricing strategy. But if industry predictions are correct, Canadians who enjoy a good sugar fix should start fattening up their piggy banks now.