In 1989, there were 1500 Dunkin’ Donuts shops in the U.S., Mister Donut was still an independent company and a “black knight” was lurking at the company’s Randolph, Massachusetts headquarters. Fighting to maintain control from a hostile takeover bid, Dunkin’ Donuts founder Bill Rosenberg steered the sale to the English conglomerate Allied-Lyons, which later became Allied Domecq.

As the sale moved into the courts, the judge asked, “What is the franchisee’s position?” In those days – like now – Dunkin’ was primarily a franchised business, but there was no entity that spoke for the interests of its 1500 shop owners.

“A lot of people forget that DDIFO came together at the recommendation of Dunkin’s senior management to have an independent an voice at the time,” remembers long-time franchise owner Jim Cain. 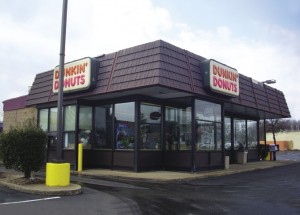 What was going on in 1989
• Toyota launches its luxury brand, Lexus
• Gasoline averaged one dollar a gallon
• The Dow Jones Industrial Average dropped 190 points on October 13 and closed the year at 2753
• Postage stamp cost 25 cents
• Batman was the top grossing movie; Field of Dreams and When Harry Met Sally were also released
• The Cosby Show was the top rated TV show; The Simpsons TV show premiered
• San Francisco beat Denver in Superbowl XXIV
• Oakland and San Francisco played the World Series during an earthquake
• Nolan Ryan struck out his 5,000th batter
• Exxon’s tanker the Valdez spilled 11 million gallons of oil in Alaska
• The U.S. invaded Panama

According to its original charter, drafted in 1989, the independent association should, “Promote the interest of the members of the corporation in connection with their ownership of franchises in the Dunkin’ Donuts Incorporated franchise system, and to take further action incidental thereto including: the development of programs and ideas and a provision of educational and other services designed to further enhance the opportunities available to the members within the system.”

As DDIFO General Counsel Carl Lisa remembers, “It was in Dunkin’s best interest to get their arms around [the sale] and be sure the franchisees were in line.”

Now entering its 25th year, DDIFO remains singularly focused on the best interests of its franchisees. Times have changed and corporate ownership has changed, but DDIFO remains the only true independent voice for a growing family of franchise owners.

“We are not just set on resolving issues, we are a proactive organization here to steer the franchisee community in the right direction,” says John Justo, who first became involved with DDIFO in the early 1990’s.

He remembers the turmoil in those early times, between franchise owners and the brand’s Market Leadership Council, or MLC—the precursor to today’s Brand Advisory Council (BAC). “The point was to create an avenue of strength among the franchisee community to move the agenda in the right direction, not just where the brand wanted to go.”

In those years, Fred the Baker was an omnipresent face on TV screens; he was the lovable face of a brand that was building an unprecedented customer loyalty base in its core markets. Dunkin’ was emerging as not just a coffee shop, with counter-seating and porcelain mugs, but, rather, as a daily stop for an on-the-go society. Coffee sales spiked thanks to increased advertising and promotions—and quality control. As Corby Kummer wrote in his book, The Joy of Coffee, “When I was growing up in Connecticut in the late ’60s, Dunkin’ was an improvement over most home coffee. The fact that they threw it out after 18 minutes and didn’t let it sit on the burner was, in itself, a giant leap.”

According to Lisa, issues in the 1990’s centered on remodeling, territory expansion and the Franchise Agreement. The fact that Dunkin’ was owned by a European interest complicated things, Lisa says.

In a 2009 interview with Independent Joe, Jason Dubinsky, who was the first president of DDIFO and passed away in 2012, recalled how after the Allied sale went through, Dunkin’ management told him DDIFO was no longer necessary because franchise owners were well-served by the existing Leadership Councils.

“We didn’t really know the new owners or what their policies would be. They were in London and we still felt there could be a threat to our business interests. We strongly felt that if Dunkin’ was sold once it could very well be sold again,” said Dubinsky. We had no way of knowing who the future owners might be or what their policies might be.”

“Franchisees felt they were being stonewalled,” Lisa recalls. “MLC bylaws were changed to diminish their power and DDIFO emerged as a viable option to have the voices of the franchisees heard. Franchisees stepped up to fund the organization for the short and long term, realizing the need for a permanent, viable organization with adequate resources.”

“We operated in a spectrum where we made things happen based on conflict. We were in conflict with the brand most of the time,” says Cain, who was involved in the MLC but not with DDIFO in the early 1990’s. He remembers noticing how the independent organization was “running a parallel path and being highly effective.”

What gave DDIFO its strength then is just what fuels it today: capital to invest in legal representation, research, education and publicity. DDIFO was able to apply leverage, which ultimately caused a change in the Leadership Councils. They were reformulated into Advisory Councils run by franchisees and representatives of Dunkin’ Donuts.

“We’ve had some tough times, but we were able to overcome and we have gained ground.

The commitment was there even in tough times,” he says. “Gathering the best we have under one name benefits everybody.”

Justo, a one-time member of DDIFO’s board, says the history of conflict between Dunkin’ and its franchisees makes the organization as relevant today as it was then. “In the past we were just about the franchisee/franchisor relationship,” centering on issues like terminations, loss prevention and rating systems. Today, he says, “We are not just an organization set on resolving issues. We are a proactive organization here to help guide the franchise community in the right direction.”

Perhaps the most intense conflict between Dunkin’ and its franchisees came to a head in September 2009, when news of the company’s loss prevention and termination strategy became public. Franchise attorney Robert Zarco, speaking at a DDIFO meeting in Worcester, Massachusetts, called Dunkin’s loss prevention department a “profit center” which increased revenue during the nation’s economic slowdown. In an article in the Boston Globe, Zarco said, “By far and away, Dunkin’ is the most litigious brand out there.”

The publicity had immediate repercussions at Dunkin’s headquarters. New CEO Nigel Travis was clearly bothered by “the noise,” as one franchisee referred to the negative publicity. “It was driving him crazy.” Travis wrote a letter to franchisees saying, “Dunkin’ Brands has never pursued litigation against a franchisee without clear cause, nor will we.”

That episode brought swift change. Dunkin’ leadership pulled back on loss prevention litigation and began repairing relationships with its franchisees.

Karen Raskopf, chief communications officer for Dunkin’ Brands (DBI) says the company is “extremely pleased with our franchisee/franchisor great relationship today.” As a publicly traded company, DBI relies on franchisees to invest the capital to drive the national expansion upon which its Wall Street story is based.

“A big part of maintaining our positive relationships is through constant communication and collaboration through our advisory council system,” she says.

Franchisees like Cain and Justo believe that advisory council system today is stronger and more responsive to franchisee needs. “Some franchisees don’t realize how DDIFO created a better advisory system,” says Cain, who is quick to note the positive impact Travis and his team has had on the relationship with franchisees.

“Under Nigel’s leadership the brand migrated to become a more operationally driven company, which resulted in both brand folks and franchisees focusing on the core business,” he says.

“The difficult part for franchisees is that you don’t know what you can’t see. Who would have predicted the 2008 [economic] crash or national healthcare insurance? There are more of those uncertainties in our future and DDIFO is there to help guide and protect the franchises in all areas of concern,” says Justo.

“This independent organization is important for the time when Dunkin’ Donuts’ leadership changes and a new CEO comes in with a new vision,” says Cain.

When that happens, Dunkin’ Donuts franchisees will do what they have done since the beginning: carry the flag for a brand that is well-loved, well-respected and well-known.

“At the end of the day we are all better because of what DDIFO does,” says Carvalho. “The better the franchisees do, the better the company does. We have more passion for this brand than most people do in other systems. The pride and commitment is what drives us. I represent the brand but the brand is me.”