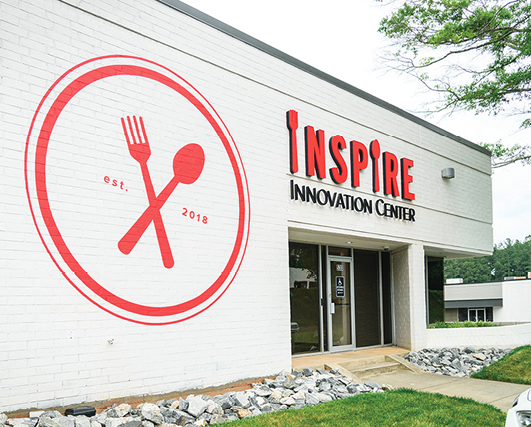 Many long-time Dunkin’ franchisees still point to the introduction of the bagel as the rocket fuel that ignited this brand. Others may say it was the relentless commitment to marketing and advertising. For Dunkin’s new owner, Inspire Brands, the next great thing may be created soon at the company’s new Inspire Innovation Center in Atlanta. One executive says the 15,000 square-foot facility will create an “environment to be creative and innovative, to take risks and to find ways to do things differently, find better solutions.”

In a recent interview with Foodservice Equipment Reports, senior director of equipment innovation and research and development for Inspire Brands Peter Cryan acknowledged the company will soon open its first ghost kitchen called the Alliance Kitchen, which will “boast all the brands under one roof. He told the magazine, “The company plans to use the kitchen as an extension of the Innovation Center, putting the latest equipment, automation and robotics in the space before they go into traditional restaurants.”

According to the trademark Inspire filed with the U.S. Patent Office, and reported last February in the Atlanta Business Journal, the Alliance Kitchen trademark is related to “restaurant services, namely offering food and drink via online and mobile ordering for delivery or pickup” and “providing ghost kitchens and commercial kitchens for use in preparation of meals and beverages for consumption off premises.”

Industry media has been keenly following the news that Inspire was investing in a ghost kitchen because the trend is growing and investors want to understand the extent to which ghost kitchens are going to impact the restaurant business.

“This is what the holding company is supposed to do—try business solutions to see what works,” says DDIFO Restaurant Analyst John Gordon, founder of Pacific Management Consulting Group. “It represents a change in thinking.”

Inspire Brands declined comment to Independent Joe about the ghost kitchen project, citing the company’s plan for a formal announcement later this fall, after press time.

The tremendous growth of food delivery during the pandemic has prompted restaurants of all sizes to explore ways to expand that business without cannibalizing their brick-and-mortar locations. With a ghost kitchen, a restaurant operator can have food prepared offsite, then made available for delivery to customers within a nearby radius. Business Insider characterized ghost kitchens this way, “[They] are one of the biggest restaurant trends to emerge from the COVID-19 pandemic, due to surging demand for delivery.

Ghost kitchens remain a matter of great debate in the industry right now, according to Gordon, who acknowledges they are “an experiment that has succeeded and deserves more research.” But, he is quick to note that the economics of third-party delivery work best in large urban areas, meaning ghost kitchens may not make sense in mid-sized cities or towns. What’s more, he notes, research shows customers do not prefer third-party delivery agents. “Customers prefer somebody from the restaurant showing up because they perceive that the restaurant cares about you, but they don’t think the third-party entities do. If there is a problem, a customer can solve it with the restaurant, but not with Door Dash,” Gordon says.

Inspire’s pending announcement is likely to generate even more buzz, just like we saw when Wendy’s announced a deal to open 700 ghost kitchens in the U.S., Canada and the U.K. through a partnership with Reef Kitchens. The first 50 delivery-only units will be coming online this year. During its August earnings call, Wendy’s CEO Todd Penegor said the company will open the kitchens in urban areas, where the brand remains “dramatically underpenetrated.”

Last April, the Nathan’s chain announced a partnership with Ghost Kitchen Brands (GKB) to bring iconic New York hot dogs and chicken wings to 60 non-traditional locations in the U.S. and 40 more in Canada this year. In a press release, Nathan’s noted, “Many of these new kitchens will live inside Walmart stores offering some seating, and all locations included in the deal will offer carry-out and third-party delivery.”

GKB says it has a “portfolio of over 20+ brands and growing, each optimized kitchen freshly prepares those branded products like a one-stop food court for walk-ins or 3rd party delivery customers.” Such a set-up might seem the right fit for Buffalo Wild Wings, an Inspire Brand that could sell well at a Walmart kiosk, for example. But Buffalo Wild Wings is a brand synonymous with watching a big game on a host of TV screens, while enjoying an alcoholic beverage or two. Like another Inspire Brand, Sonic, part of the pleasure of getting the food is experiencing the environment.

In an article he wrote for Restaurant Dive magazine, Chris Adams, the vice president of strategy at Oracle Food and Beverage, said, “The ghost kitchen model demonstrates value for franchises, especially as chains are using the model to recoup lost revenue from the pandemic.” He also noted that virtual brands reduce labor and real estate costs, because they are not really restaurants.

Inspire’s ultimate strategy for its Atlanta-based ghost kitchen remains unclear, but the company’s willingness to invest in innovation is crystal clear.

“This is a test from a creative bunch. A company like Inspire should be a new product incubator,” says Gordon. “Inspire is trying to see what exact menu mix elements from the brands could be attractively and efficiently paired with other menu mix elements from another brand to create something unique, with a large ticket. They can test and execute this via the ghost kitchen.”

“When we brought robotics in, people were like, ‘What?’ until they saw it work, then they thought, ‘That has potential,’” Cryan told the publication.

Dunkin’ has already staked its place as a popular as a grocery store brand, with K-cups, bagged coffee and bottled iced coffee. During its final call as a publicly traded company, Dunkin’ reported a 19% increase in the sales of consumer-packaged goods during the third quarter of 2020. How Dunkin’ might realize future growth through Inspire’s ghost kitchen remains to be seen. What appears clear is that the ghost kitchen will have little or no impact on the National DCP, Dunkin’s cooperatively-owned supply chain, according to an email from spokesperson Emily McDougald which stated, “NDCP will not be affected by the new kitchen as they will be serviced like other members.”

Gordon does not see a ghost kitchen threatening the many central manufacturing locations (CMLs) that Dunkin’ franchisees have successfully built and managed. “Ghost kitchens have different equipment for what Inspire Brands needs. Things like a grill, fryer and salad prep station; that’s not in a commercial bakery,” he says.

For an industry that has been beaten and battered by a pandemic, staffing crisis, supply chain disruptions, fear and general confusion, ghost kitchens represent a novel concept that could become the next big thing, like bagels did for Dunkin’ Donuts all those years ago. As with any other innovation promising to shake up the industry, there will be questions. This Halloween season, franchisees will be watching closely to learn how a ghost kitchen could inspire their future.