Jim Coen, President of the Dunkin’ Donuts Independent Franchise Owners, has been selected Vice Chair of the Coalition of Franchisee Associations 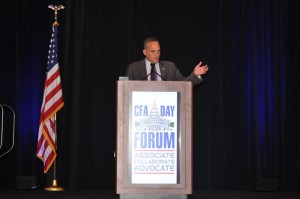 (CFA). Coen will assume the role previously held by Ron Soto of the Meineke Dealers’ Association.

“It’s an honor to take the position of Vice-Chairman as part of leadership of the CFA. The CFA is doing great things to advance franchisee issues and business interests,” said Coen. “The CFA board is made up of highly engaged franchisee leaders who are diligently working on behalf of their franchisees.”

The CFA represents over 10,000 franchisees and over 50,000 locations throughout the United States. Among the members are franchise groups representing: Pizza Hut, Buffalo Wild Wings, Hardee’s and Supercuts. Founded in 2007, the CFA provides a forum for its members to share best practices, knowledge and resources for the benefit of the entire franchisee population.

At the association’s November 30th meeting, Dave Glodowski announced he would remain as Chairman of the CFA. “We are pleased to have Jim Coen serve as our Vice-Chairman for 2011. As President of DDIFO, Jim has demonstrated a passion for franchising and for advancing those issues most important to their members,” Glodowski said.

DDIFO is one of the founding members of the CFA and has been actively involved in the annual CFA Day Forum on Capitol Hill. As Vice Chairman, Coen has been selected to chair a committee on Fair Franchising along with CFA Secretary Tony Szambecki, and Misty Chally, CFA’s Deputy Executive Director.