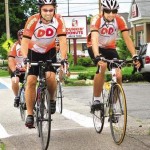 Durval Salema, left, and his brother Issac Salema begin a training ride for the Dunkiin’ Donuts team to raise money for cystic fibrosis research in the Seacoast Safari bicycle ride which takes place on July 16-17, 2011 this summer.

Seacoastonline reports that when Durval Salema’s legs are aching and his body is tired while pedaling his bicycle up steep training hills, he looks down at the photograph of his son Trevor taped to his bike. Seeing this photograph motivates him to continue.

“I think I’m in pain, but I look down at my son and remember everything that he has to go through on a daily basis, from treatments twice a day, to the pills he is constantly taking,” said Salema of Exeter. “The photograph reminds me that if he can do that every day and deal with all the other issues he faces, I can ride my bike and not give up, no matter how tired I am.”

His son was diagnosed with cystic fibrosis when he was only four months old, and he is the primary reason that Salema is toughing the 150 miles in the 10th annual Seacoast Safari cycling tour to benefit cystic fibrosis research. Salema is a member of the Dunkin’ Donuts fund-raising team, which hopes to raise $20,000 this year with its 30 members on the two-day ride July 16-17.

The ride starts in Newbury, Mass., and follows a coastline route to the University of New England in Biddeford, Maine. The two-day tour is 150 miles, however, riders can also take part in an abbreviated ride.

It’s Dunkin’ Donuts’ fifth year being involved with the event and it’s Salema’s second year riding. Last year the team of 18 raised $13,000, and so Salema is confident they will be able to reach the $20,000 mark this year.

Salema, who is an Exeter native and owner of the Dunkin’ Donuts in Exeter, Hampton and Dover, said he is so thankful for Dunkin’ Donuts’ involvement in both the event and in raising money and awareness about the disease.

Dunkin’ Donuts has also sold sneakers in efforts to raise awareness and money for cystic fibrosis, but it was five years ago that Dunkin’ Donuts operations manager John Carroll first took part in the annual bike ride.

Carroll heard about the event in 2007 while he was training for the Pan Mass Challenge. Salema asked if he would ride for this event for part of his training.

“I got involved because I became good friends with Durval and his family,” said Carroll. It’s also a personal issue for Carroll, as well; both his wife and his daughter carry the recessive gene for cystic fibrosis, said Carroll, and when his daughter was a baby, they thought that she too might have CF.

“I remember how scared my wife and I were, and how at the time, we didn’t even know what CF was,” said Carroll.