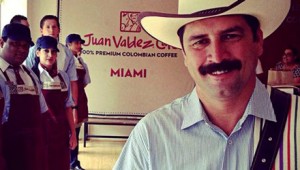 Juan Valdez Coffee shops are slated to open in some 60 locations across the state of Florida over the course of the next five years.  Procafecol, the Columbian company that owns the Juan Valdez brand opened its first shop in Miami this past week and is targeting markets with largely Hispanic populations in the Sunshine State, Texas and Southern California.  Juan Valdez shops formerly operated in New York City, Seattle and Philadelphia, but closed US operations years ago.   Elsewhere, we took note of a story about Tim Hortons launching a new store concept with the introduction of coffee-flavored beer, unisex bathrooms, touchscreen menus, omelets and more at the Metro Toronto Convention Center.  Lastly, we read a news story announcing that Peet’s Coffee & Tea will be closing all 7 of their retail shops in the Ohio market less than one year after those same stores opened with much fanfare.