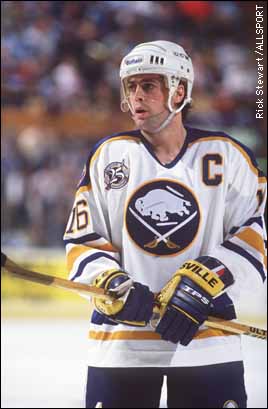 Joseph Mallia of Newsday reports that a Nassau Supreme Court fraud claim against Dunkin’ Donuts’ parent company, brought by an investment company partly owned by former Islander and Hockey Hall of Famer Pat LaFontaine, will proceed after a judge’s ruling this week.

The suit accuses Dunkin’ Brands and other defendants of “fraud, concealment and negligent misrepresentation” after LaFontaine’s company invested, and lost, at least $1.75 million.

LaFontaine’s company, High Tides Llc, says it was induced to keep investing in a Dunkin’ Donuts franchise group, even as the group was on the edge of insolvency.

Nassau Judge Stephen A. Bucaria issued a court order in the case Tuesday, dismissing some claims and keeping others, so the case remains active. No date has been set for the next hearing. Attorneys for both sides in the case were unavailable for comment Thursday. LaFontaine is not a party in the suit, though he is a director of the company that filed it.

LaFontaine’s role included signing autographs at Buffalo-area Dunkin’ Donuts shops. In addition to his long stints as an Islander and a shorter time as a New York Ranger, LaFontaine is considered an all-time great with hockey’s Buffalo Sabres. His participation in the company was important because Kainos was competing in Buffalo against Tim Horton’s, a rival doughnut and coffee seller named for another former Sabres star. Newsday reported in 2004 that LaFontaine lives in Huntington.

In December 2008 a Kainos executive told LaFontaine that the total Kainos enterprise was worth $70 million, court records say. But by mid-December 2008 “Kainos was without money to continue operations.”

Kainos executives gave LaFontaine financial statements and induced him to keep investing even as Kainos was failing, the documents say. The lawsuit is not filed against Kainos, but individually names four executives of that company along with the corporation Dunkin’ Brands.