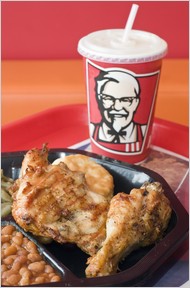 A two-piece Kentucky Grilled Chicken meal at a KFC location in Louisville, Ky

Five of the top 11 most-remembered new products (there was a tie for 10th place) were fast-food items, reflecting the perilous state of the economy this year. In 2007 and 2008, technology products dominated the list.

The grilled chicken landed atop the eighth annual Most Memorable New Product Launch Survey, conducted by Schneider Associates, IRI and Sentient Decision Science. Consumers are asked to name a product introduced during the year; if they are unable to, they are provided a list of 50 products in a process known as aided recall.

Underlining just how difficult it is to bring out new products is the fact that 51 percent of survey respondents could not remember a single new product that came out in 2009. As high as that figure was, it was lower than the 69 percent who could not recall a new product in 2008.

These are the four other fast-food products that scored the highest in 2009: the McCafe coffees from the McDonald’s Corporation, No. 2; the Torpedo sandwich from Quiznos, No. 6; the Angus Deluxe, also from McDonald’s, No. 7; and Taco Bell Volcano Nachos, from another unit of Yum Brands, No. 8.

The rest of the list: the Beatles Rock Band video game, No. 3; the Snuggie, No. 4; the Blackberry Storm, from Research in Motion, No. 5; the T-Mobile Google G-1 phone, No. 9; and in that two-way tie for 10th place, Samsung L.E.D. TV sets and the Off Clip-On insecticide from S.C. Johnson & Son.

At KFC, the reason for the popularity of Kentucky Grilled Chicken is that “it hits a sweet spot in the market,” said Javier Benito, chief marketing officer at KFC in Louisville, Ky. He added that consumers considered it to be “a great-tasting product that’s good for you at a great price.”

The new menu item was tested for four years before being introduced in April, he added.

Usually, about 7 percent of customers of fast-food restaurants try a new menu item, Mr. Benito said, but in this instance the grilled chicken was tried by 13 percent — a figure that rose to 19 percent after a fuss over too much demand for coupons that had been promoted on an episode of “The Oprah Winfrey Show.”

“You can imagine no one expected” the demand for the coupons, Mr. Benito said. “It was crazy.”

For 2010, KFC intends to keep trying to build consumer awareness for the grilled chicken because “over 80 percent” of those who try it buy it again, he said.

In conducting the survey, Schneider Associates said it found several trends at work, among them the increasing importance of word-of-mouth marketing to the success of a product and the rising number of information sources used by consumers to learn about products.

But some things do not change. The survey found that 92 percent of respondents said that free samples are the most influential source of information to make purchase decisions.