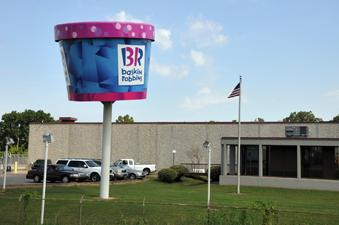 One of the most famous and eye-catching icons for Klinke Brothers Ice Cream Co. along Interstate 240 — and visible from north- and southbound planes into Memphis International Airport — has a new look.

After 22 years, the giant billboard shaped in the sign of a gallon ice cream tub has changed is trademarked Angel Food brand design to Baskin-Robbins.

The elevated and slightly tilted tub sits in front of Klinke’s headquarters and manufacturing facility between Lamar and Airways. It was put there in July 1987 on the recommendation of Memphis advertising executive John Malmo, says Preston Klinke, vice president at Klinke Brothers and great-grandson of the company’s founder.