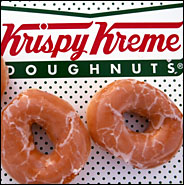 Krispy Kreme Doughnuts Inc. continues to take steps to re-emerge from the doldrums and strengthen its image and bottom line.

The Winston-Salem-based company has remodeled each of its four Triad stores and opened a fifth on University Parkway in the Twin City, ensuring each is in position to offer a wider range of menu items.

Steve Wymer, Krispy Kreme’s market manager for the Carolinas, said the Triad will also be a likely test market as the company looks to broaden its offering of baked goods, including bagels, muffins and other pastries.

To promote the additions, Krispy Kreme is also running television advertising in the Triad and Nashville, Tenn., the company’s only two markets with enough stores — about five within 20 miles in each market — to make TV spots worthwhile. The “Think Krispy Kreme” marks the company’s return to the airways after a nearly four-year absence.

Wymer said the moves indicate the company’s increased confidence it can make a successful turnaround.

“We’re probably stronger right now than we’ve been in a long time,” Wymer said. “It feels good to be able to renovate and open stores and offer a wider menu.”

The company has kept a relatively low profile in recent years following a steep decline from its heyday.

Scrutiny from investors and the Securities and Exchange Commission in 2004 — Krispy Kreme’s last profitable full year — uncovered accounting irregularities. The company paid $75 million to settle an investor class action suit in 2006, and in March three former executives paid $783,000 in fines to settle the SEC probe.

That chapter closed, the company in June reported its second profitable quarter in the last five, and sales at company-owned stores open at least a year saw a 2.1 percent increase.

And Krispy Kreme has reduced its debt from $71 million to $39 million during the past two years.