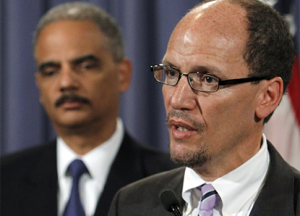 Following along that same line of thought, we are quite concerned about the notion, raised in a number of circles, that Labor Secretary Tom Perez may be nominated by President Obama to replace outgoing Attorney General Eric Holder.  Perez has impeccable credentials as a union advocate, but not so much as an impartial enforcer of existing labor law.  His record with the Department of Labor as well as with the Civil Rights division of the Department of Justice speaks to a strong and unapologetic advocacy of organized labor and ideology at the expense of impartiality and equitable judgment.  We generally don’t like to speculate on future issues, but this possibility begs to publicized!