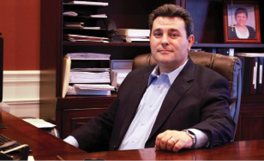 Some entrepreneurs learn about business by going to college, while others absorb books written by the business greats before them. Lino Santos started learning about business when he was in his 20s and a baker in a Dunkin’ Donuts franchise. Even then, he knew that one day he wanted to own his own shop. Today, he owns six in New Jersey and has three in the queue to develop within the next year.

It was the early 1990s when Santos manned the baking table, kneading dough and making donuts. He worked for Carlos Andrade and Manuel Andrade, who were uncles to his new wife Dora. When the Andrades sold the store to Joe Prazeres, Lino and his new wife stayed on, choosing to remain in southeastern Massachusetts. Over the next seven years, Santos and his wife worked closely with Prazeres, learning valuable business lessons that no book or university could teach them.

“The new owner was a down-to-earth, compassionate human being who we highly admire [to] this day,” says Santos. We agreed with his work ethic and his principles and desires to accomplish the best customer service. My wife and I truly believe that he was, in fact, one of our biggest inspirations. He instilled in us values that we use to this day.”

The employee experience was invaluable, but the couple aspired to own their own store one day. The only thing that was holding them back? Money. It took seven years for the couple to come up with enough money to buy their first Dunkin’ Donuts shop. At that point, Santos remembers, “We approached my wife’s uncles, Carlos and Manuel, who still are current franchisees with large networks, and asked them for help finding a location.” 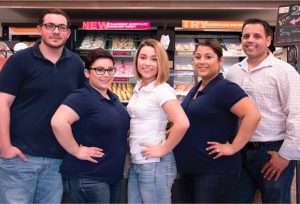 The family entered into a partnership to purchase two existing stores in Marlborough, Massachusetts, about an hour north of Santos’ home in Taunton. However, as excited as the new franchise owners were, taking over existing businesses come with their own unique set of challenges. That’s when you come to appreciate the selfless acts of others who are there for you.

“My cousin Peter Santos and his wife Lucy were there when we took over the stores to help us settle in. When I was short a baker and working long days to cover both shifts, Peter was there to bake for me to give me the night off to rest. When my wife was exhausted and needed some reassurance, Lucy was there for moral support. Over time, Peter was more like a brother to me. I am forever grateful. Peter and Lucy now reside in Florida as Dunkin’ franchisees.”

Right off the bat, Santos concentrated on remodeling his new shops. “They were in terrible condition and extremely overdue for remodels and repairs,” he says. “The businesses were also not profitable.”

Santos estimates that the businesses were $80,000 in the red, but with retraining, remodeling and a dedicated work ethic, it didn’t take long to see a change. “Within six months we were already generating a profit,” he says. “The first and second year we had 23 percent increases each year, and the third year we had an 18 percent increase and continued to increase thereafter for as long as I was there. The increases were due to better customer service and better efficiency that came with the remodels.”

Like many franchisees who discover how to make their stores work for them, the couple always felt they could continue to grow their business.

“We were working on the fourth location when my wife and I looked at each other and realized we loved the area, but knew we were limited,” Lino Santos remembers. “There was such a saturation around the area with a lot of well-established franchisees, so the opportunities for someone like us to continue [growing] would be very limited.”

The couple sold their interest in the partnerships and decided to fly solo. It was late 1990s when they acquired their first two wholly-owned franchises in New Haven, Connecticut. Recognizing the opportunity to create more density in their territory, they built two more for a total of four locations, all the stores within a mile and a half of one another.

“At that time, New Haven was, unfortunately, a very urban environment,” he explains. “The crime rate was at a level where I didn’t feel comfortable. Our daughters were at that time starting to work in the business and we were growing concerned if something could happen to one of them.” 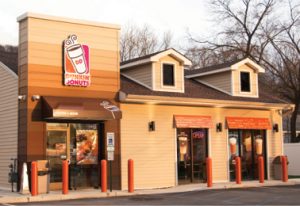 So they sold the Connecticut stores and acquired stores in Morris County, New Jersey. “I was looking at some of the opportunities in Florida, but I wasn’t happy with their product mixes and lease rates,” he says. “The opportunity in New Jersey was a suburban environment and the financials made more sense. It was a right fit.”

Still, the couple was facing familiar challenges. “We had to retrain personnel and make many updates, such as remodels, updating the sandwich stations, get new ovens because they weren’t operationally acceptable.” Santos even replaced the old Casio cash registers with new POS (Point of Sale) systems. “Overall, there were a lot of capital investments needed in the first twelve months, but even with those improvements, it was still profitable from day one,” he says.

While running the franchise in New Haven, Santos earned his license to sell commercial real estate. “I did that as an enhancement to complement what I do, because when I’m looking for sites to develop, the information and resources comes in handy,” he says. “I also enjoy assisting other people and enjoy the interaction I have with the commercial representation; I find it rewarding.”

As he settled in, Santos also reached out to the local communities. “We support local police and fire departments,” he says. “Even though we’re a national brand, we treat each shop as a mom and pop store. I’m sure a lot of franchisees can relate that we treat our customers and try to provide more of a personal connection. They feel loyal to us, and I think that goes a long way.”

The couple’s daughters have since graduated from college and work in the family business. “I’m making acquisitions and developing more locations so I can better position my family and daughters to have their own shops in the future,” he says.

Today his entire family is fully involved in the business with Santos taking care of the administrative duties and development opportunities, including acquisitions. “Everyone has their responsibilities and roles, and it makes things a lot easier when it is not one person having to take care of all facets of the business,” he says. “My operations manager, Michael Resendes, has been with me since I took over my first store in Marlborough. He was 15 years old, and today he’s 35. He’s moved with me since I’ve owned my first store, to the point where my oldest daughter grew fond of him and today he’s my son-in-law.” This year, Santos will be a grandfather.

“I couldn’t do this without my wife, she backs me up when I need help and are my ears when I need to vent,” he says. “She was in the store we just took over three days ago, cleaning, organizing and training.

Looking back on his career, Santos admits being a franchise owner is much easier today. “The business is more of a retail operation where the majority of our items, especially the baked goods, come in prepared,” he explains. “It’s nice because you don’t have to divide your focus between production and retail. In the past you would have to juggle the front and back of the house, but now you have more time to interact with guests.”

The family’s hard work has paid off, not just in terms of profitability and success. They’ve also been recognized twice by Dunkin’ Brands earning the Operations Excellence Award for 2013 and 2015.

“Although we do the best for our businesses and for the brand regardless if we get awards or not, it is humbling to be recognized,” he says. “I truly enjoy what I do.”

Santos knows that with any business there is always a financial risk and no guarantees, but he says that the Dunkin’ Donuts brand is a reputable and sound investment.

Santos explains that the partnerships that an entrepreneur forms are vitally important to their success. “I know when I was buying my first store it was very frustrating because the financial institution was not familiar with our business, so you spend a lot of time discussing it over and over. The fortunate thing for me is I found Northern Bank, which does a lot of business with Dunkin’ franchisees,” and helped expedite the lending process because of their familiarity with the brand. “The way I look at it, every minute, every hour that you have is important. You don’t want to spend valuable time discussing your business when it’s not producing anything,” he says, echoing what he could have read in a Business Administration course at any top university.

“The general public seems to think you just turn the key and start making money, but it doesn’t work that way,” he says. “Like any other business, you make the investment and you have to work at it. You just can’t sit back. No matter how many stores you have, you have to be involved in the business and [monitor] every step of the way so that things don’t fall apart or divert off course.”