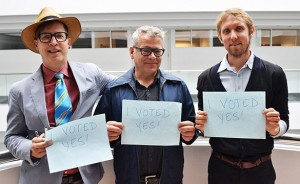 Keith Boadwee, John Priola and Christian Nagler, all visiting faculty at SFAI, attended the vote count at the NLRB in San Francisco on Friday, May 30.

We wondered aloud last week where the idea of a $15/hour minimum wage would next rear its head and it didn’t take long to find out.  On Monday of this week, San Francisco Mayor Edwin Lee announced a “negotiated compromise” that seeks to raise the minimum wage in San Francisco to $15/hour, the highest in the nation.  The announcement in the Mayor’s Office, which was attended by every member of the Board of Supervisors, means that a ballot measure will be submitted to San Francisco voters this November.  The “compromise”, which was reached between the Mayor’s Office, Service Employees International Union (SEIU) and Unite Here, was also supported by the Campaign for a Fair Economy.  The “negotiated compromise” calls for the minimum wage to increase to $11/hour effective January, 2015, then to $12.25 on May 1, 2015 and $13/hour in July 2016.  Subsequently, it would go to $14/hour in July, 2017 and $15 in July, 2018.  After 2018, adjustments would be indexed to the Consumer Price Index beginning in July, 2019.  The proposal, which must be approved by San Francisco voters, also provides an exception for youth and seniors in that their minimum wage would be capped at $12.25 and subsequently tethered to the Consumer Price Index (CPI).  San Francisco law mandates a public hearing before any proposal is approved for the ballot, so we will try to keep you advised when the public hearing is scheduled.