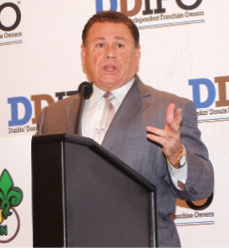 You have a lot of people with their eye on your money,” Attorney Christopher Menihan warned franchisees attending the DDIFO National Conference. “If your network happens to get hit, one of these is enough to topple everything you’ve been working for.”

Menihan is an associate with Lisa & Sousa, DDIFO’s General Counsel. And, he was referring to the damage a class action lawsuit can have on a franchisee, but his comments apply to other legal risks franchisees face in today’s world.

Class actions, which involve groups of people filing suit as one entity, are becoming much more prevalent, as law firms seek out disgruntled customers around the country and steer them into court against brands like Dunkin’.

Menihan and attorney Diane Saunders, with the labor and employment firm Ogletree, Deakins, Nash, Smoak & Stewart, referenced three cases involving Dunkin’ Donuts franchisees accused of fraud. One case centered on the use of margarine instead of butter; another questioned the quality of Angus steak; and the third asserted franchisees put fake blueberries in their donuts. What these cases have in common, the attorneys said, was that a customer ordered one thing, received something else, paid (in some cases a premium of 25 or 50 cents more) for what they ordered, and were not informed that some switch had been made in what they ordered.

“If the customer had been informed, we start to lose a lot of the risk of these lawsuits,” explained Menihan. In the butter vs. margarine cases, a margarine spread was used on a bagel instead of actual butter. In the April/May issue of Independent Joe, Executive Director Ed Shanahan explained that franchisees often use margarine instead of real butter since it can be stored at room temperature and is therefore more easily spread. But when customers ask—and pay—for butter, they want butter.

The Angus steak case against Dunkin’ Brands in New York is similar. A customer named Chufen Chen ordered an Angus Steak Sandwich, and paid 50 cents more for the steak, but alleges that she received a beef patty instead. 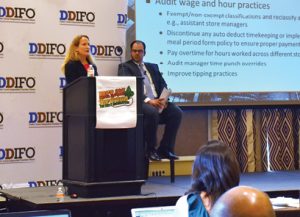 In the case of the blueberry donut, Grabowski v. Dunkin’ Brands, corporate blamed the Chicago franchisee in court, saying the brand is “shielded from any harm” and that “franchisees would be responsible for any economic harm.” Menihan said Dunkin’ Brands made it clear they want franchisees to foot the bill for these frivolous lawsuits.

“I can see these things very easily traveling throughout the country and hitting Dunkin’ franchisees all over,” he added. “Consider what that might mean to your network.”

Menihan offered strategies for avoiding such consumer claims, including asking the franchisor to eliminate certain products to eliminating price premiums for products like butter, and training staff to inquire if a product substitution is acceptable to a customer.

Saunders warned against similar class action cases for labor disputes involving misclassification of employees as exempt, meal and rest breaks, tipping violations, off-the-clock work and overtime violations. She advised that franchisees consider a voluntary or mandatory arbitration program as a way of avoiding a class action, in addition to employment practices liability insurance.

Another big legal trend with the potential to devastate franchisees is encroachment or intrusion on a person’s territory. Say you have a very successful store and are looking for expansion opportunities, then your brand goes and builds a store right next to you. Bad for business, right? Miami attorney Robert Zarco and a California jury agree.

In May, Zarco scored a landmark win representing a husband and wife franchisee team, Michael Bryman and Janice Handler-Bryman, against their own franchisor, the fast food chain El Pollo Loco. The judge found that when El Pollo Loco Inc. opened two company stores just miles from the Brymans’ existing location, it breached its implied covenant of good faith and fair dealing. The judge awarded the Brymans $8.8 million.

Zarco, who has been promoting franchisee and franchisor relationships for more than 30 years, said franchisees need to be aware of the “reservation of rights” clause in their Franchise Agreements, which basically says franchisors can put a location wherever they want.

“The only way to change that is by establishing new laws either through legislation or in the courtroom,” he said.

Zarco admitted most franchisees are reluctant to go to court, but they need to be aware of the impact of encroachment on sales and how it can really affect their store’s bottom line. In the Brymans’ case, their El Pollo Loco store saw sales drop 17 percent when another location opened 2.2 miles away. Zarco said in some cases the impact on sales can be as high as 30 percent.

In court, Zarco successfully argued that the reservation of rights clause was legally unconscionable; it was so dishonest, unfair and immoral that it is appalling to a person’s senses, he remarked. The court’s judgment essentially allowed the Brymans to not only recover damages for lost sales in the store that was encroached upon, but also be paid for 20 years’ worth of lost net income because El Pollo Loco had blocked the Brymans from opening new stores that would have yielded significant profits. Zarco called recovering these lost opportunities for the franchisee a “home run.”

“Never say, ‘I don’t stand a chance,’” he advised franchisees. “The reason why [encroachments] occur is because we don’t stand up to franchisors. There is always hope.”