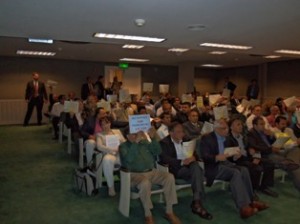 DDIFO asked Restaurant Analyst John A. Gordon of Pacific Management Consulting Group to attend the California hearing in Sacramento and take some notes for DDIFO’s behalf.

Good news for franchisees from California!

The vote was close and questions intense. Assembly members requested several modifications, and the bill’s sponsor, Assemblyman. Jared Huffman (D-San Rafael) indicated needed modifications can and will occur to make it even better.

As it turned out, the six yes votes were all from Democrats and the three no votes were from Republicans. Over 70 franchisees and allied partners testified for the bill. The California Chamber of Commerce and the franchisor law firm DLA Piper testified against it.

Many of the proponents, including Asian American Hotel Owners Association (AAHOA), Coalition of Franchise Organizations (CFA), American Franchise Association (AFA), Seven -Eleven, McDonald’s and Wendy’s franchisees, and many others, gathered last Monday evening in West Sacramento for an organization session. The room was packed with almost 100 attendees. The franchisees were excited and energized. Virtually all noted some franchisor performance or contract related problem. The group was organized, with signs and posters pre-prepared.  I was present and represented DDIFO.

On the morning of the hearing, 80 franchisees and other proponents gathered in the State Capitol hearing room. While the morning session grew long, AB 2305 came up for consideration just beforenoon. Assemblyman Jared Huffman introduced the bill indicating its great need. Attorney and lead drafter Peter Lagarias and CFA Chair Keith Miller then testified, followed by approximately 70 franchisees and other supporters. That was followed by testimony from opposing parties.

The opponents, led by the franchisor law firm DLA Piper, said they were unaware of problems, that there was not a surge of legislation, and that nothing had changed to require such legislative corrections. Among those testifying was a senior partner from DLA Piper’s franchising practice, representing the International Franchising Association (IFA), and the California Chamber of Commerce.  It was somewhat ironic to see DLA Piper on hand, as one of its founding partners was the lead in creating the complex and difficult contracts now in place.

Assemblymembers had comments and questions about why this legal factor or another was included in the bill. Assemblyman Mike Feuer, Chair of the Judiciary Committee, said the bill “needs more work.”  However, many saw an unlevel playing field in need of policy changes. Assemblyman Huffman recognized the need to make further improvements to the bill and committed to do so.

Why is this bill needed?

Huffman, Larigas and Miller summed up why the bill was needed during their testimony. In one of the most insightful comments, Larigas noted, “At the core of the franchise relationship is the contractual control exercised by the franchisor over every aspect of the franchisees business.”

“There is an imbalance today that adversely impacts people’s lives,” said Miller, who is also a Subway franchisee.

Other speakers highlighted that one sided franchise agreements have become prevalent over the last 40 years, resulting in contracts that are not on a level playing field; that franchisees make total, personal investments in their business, and are totally at risk; and that current California franchise investment law is a 40 years old and needs updating.

How did this effort come together: good organization

Even as efforts are underway to create fair franchising legislation in Rhode Island and Massachusetts, California franchisees have been working to improve the historically disadvantaged position that franchisees have suffered as a result of one-sided contracts. A group of interested parties began working on draft legislation several months ago. Assemblyman Huffman, who had long term interest in this topic, took the lead in sponsoring the action. He introduced it in Sacramento two months ago.

AB 2305 faces a vote in the Assembly Business and Professional Committee on April 24.

“I’m hoping for a good outcome in the next committee. [But] each one of these committees is an opportunity for the industry to line up opponents and kill the bill. It’s going to be one battle after another,” said Huffman.

John A. Gordon is Principal of Pacific Management Consulting Group. His article was written at the request of the DD independent Franchise Owners.