When her husband was battling cancer, Ava Lawrence turned to Dunkin’ to support herself and her children’ 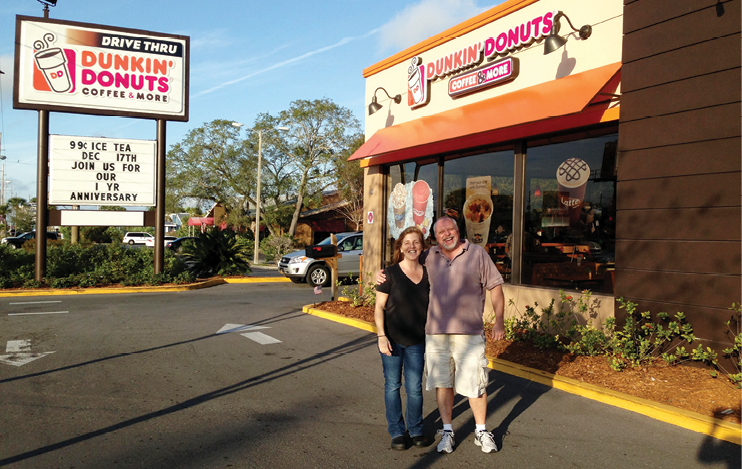 Ava Lawrence and her partners are preparing to build their seventh Dunkin’ store in the Tampa Bay area. Getting here has been a long road for the Massachusetts native. Unlike many New Englanders who have made their career in this system, Dunkin’ wasn’t part of Lawrence’s career path. You could say she was following the beat of a different drummer. For 20 years, she worked in the music industry.

“I was in LA for three years and there, I licensed music for TV. When I moved to New York to be back near my family, I got a job at TVT Records, making it legal for music to be used in TV, film, video games, and compilations,” Lawrence recalls.

Her transition from music to Dunkin’ was something quite personal—stepping into the business as her husband Keith was losing his battle with cancer.

When Lawrence and her husband decided to have children, they moved to Marblehead, an oceanfront community north of Boston, where Lawrence’s sister and brother-in-law lived. While there, Lawrence went to work at Northeastern University teaching the business of music to undergraduates. But then life took a tragic turn.

“[He] developed rectal cancer three years after we got married. We just lived our lives because he’d be okay sometimes and then he wouldn’t be, so when he was okay, we’d take advantage of that time together. We had kids in the middle of cancer,” says Lawrence.

When her husband was diagnosed with secondary cancer in his brain in 2010, she began worrying for their future. 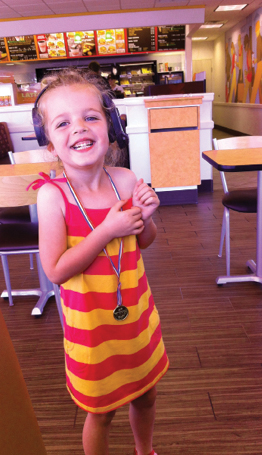 “I knew eventually this was not going to end well. His initial prognosis was 4 to 5 years with rectal cancer and we were in year 7 of his cancer battle, adding brain cancer to complicate the matter. I was trying to figure out how to raise a 3- and 5-year-old, take care of a gravely ill husband, and financially support us all,” she says.

At the time, her brother-in-law, Jim Adler, owned a Papa John’s pizza franchise in Massachusetts and was opening up a Dunkin’ in Florida. He suggested Lawrence help him run his Dunkin’ business. After careful consideration, she agreed.

“I was familiar with Dunkin’, having visited family in the Boston area growing up and attending university in Boston. Plus, I needed a career where I could support and spend time with my kids, and being a Dunkin’ franchise owner gave me the freedom to do just that. I was extremely fortunate to fall into that situation,” Lawrence says.

In 2010, her husband began brain cancer treatment at Dana Farber Cancer Center in Boston. His mother temporarily moved in to help care for him and the children so Lawrence could attend Dunkin’ Donuts University. She went to Dunkin’ U during the week and would travel home on the weekends.

When the first store was built, Lawrence flew to Florida often to make sure things were moving along. In November 2011, she moved her family to Florida. The store opened in December 2011. Twelve months later, her husband passed away.

Over the past decade, Lawrence and her partners have expanded their footprint to include seven Dunkin’ shops. While she appreciates the success and growth, she says losing her first husband has given her a unique perspective.

“I believe you have to keep moving forward and take advantage of the opportunities that are presented to you. I always said I’d do Dunkin’, until at least my youngest child was in middle school, and he is now, and I’m still doing it. It just feels right for this time in my life,” she says, but admits she never looks too far into the future.

“My partners do a lot of that. I think cancer does that to you because you’re always on a three-month cycle. In the beginning of my husband’s cancer, he had to have a CAT scan every 3 months, so we couldn’t look past those three months because if something was bad, we had to stop everything we were doing to go through a treatment and regroup and then start again,” Lawrence says.

After nine years of 3-month cycles, Lawrence says she prefers to tackle what’s right in front of her. “That’s not to say I don’t plan things, but I’m not tied to things that are so far out,” she says.

She approaches her Dunkin’ business with the same mindset.

She addresses problems as they arise. “If we make a mistake, we fix it. It’s not the end of the world,” she says.

For instance, like many franchisees, Lawrence says her shops are experiencing a staff shortage due to the pandemic. To make up for the slack, she helps out behind the counter when she is needed. 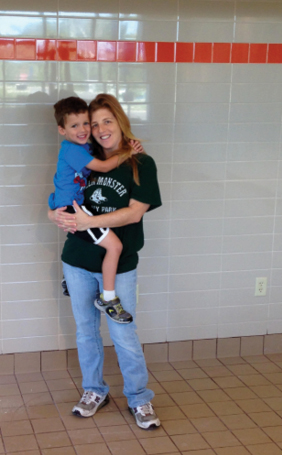 “We have someone who runs the stores, but if she needs help, I step in. When you own a store, you love it and feel close to it. You don’t want anything bad to happen to it, so if there is anything I can do to support my crew, I do it,” says Lawrence.

More than anything, Lawrence says, her favorite part of the business is working with general contractors developing new locations.

“I love putting the Dunkin’ in the Dunkin’. Once the developer hands us a shell, I finish it off to be Dunkin’—the kitchen and all the insides,” says Lawrence.

From time to time, she finds herself tapping into the research and problem-solving skills she gained while working in the music industry.

Like other franchisees that have been in a growth pattern, Lawrence realizes the team can’t overlook the existing locations by focusing too much on the next one under construction. She says her group’s priority is always making sure their Dunkin’ shops are clean, friendly and properly run.

“We look at Dunkin’ as something we love to do. Yes, it makes money and people are successful at it, but we want to grow our business organically,” she says, referring to operating Dunkin’ as a “one-of-a-kind experience.”

In a good place

Lawrence has remarried, and together she and her husband have a blended family with six children. The son and daughter she had with her first husband are now 15 and 13. Looking back at the challenges she and her children have faced, and where they have come since, Lawrence says her connection with Dunkin’ is one of the things she is most thankful for. And that appreciation has helped her forge strong ties to her community.

She supports the Conservation and Collections Management Department at the Museum of Fine Arts in Boston, where her late husband worked. She also supports the Clearwater Jazz Holiday Foundation and volunteers at Suncoast Animal League in Palm Harbor. Most recently she joined the board of directors for Hero to a Child and is a Guardian ad Litem, training to be a surrogate parent, which will allow her to represent foster kids who have 504s and IEPs in the public school system. These experiences, she says, have helped strengthen herself, her family and her community.

“We have all learned resilience and how to keep moving forward in a positive way.” •