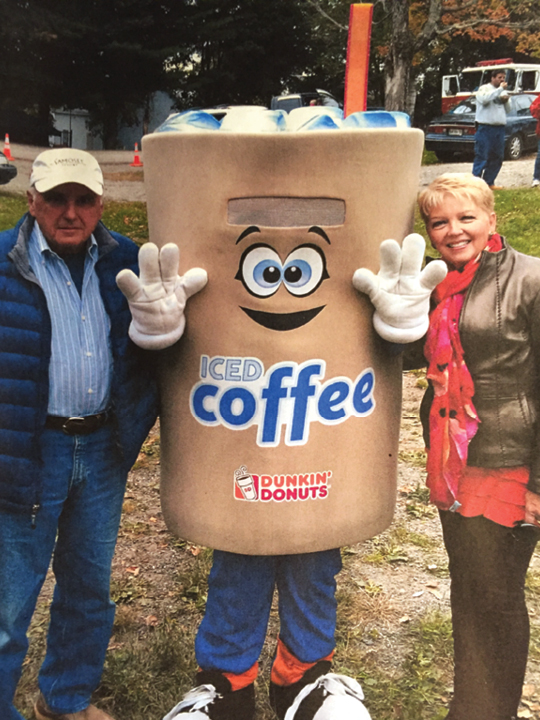 When Colleen Bailey walked into her local Dunkin’ in Rockland, Maine, she knew she would get donuts and coffee. She didn’t know she’d fall in love, get married and eventually own nine Dunkin shops of her own.

“Ed owned the Dunkin’ and I lived right up the street from it. That’s how we met,” says Colleen.

That was in 1972, the year Ed Bailey bought his first Dunkin’.

Before that, Bailey spent seven years working for Dunkin’ Brands.

“I started with Dunkin’ because of an ad I read in the Boston Globe in 1965. They only had about 100 stores at that time,” Bailey remembers.

At corporate, he worked in different roles, including as the head of Dunkin’ Donuts University and performing quality control.

“They were a young company and they moved us around so I not only lived all over the country, but in 1970 I went to Japan for a year for their first international adventure,” Bailey says. “William Rosenberg was the president of the company and Tom Swartz was the [chief] executive. It was amazing to work with key people setting the goals of Dunkin’.”

Yet on an impulse, Bailey decided it was time to leave the brand and open his own Dunkin’ Donuts restaurant.

“Corporate called me and asked if I’d be interested in doing some special assignments. I said ‘yes.’ Then I sold the store,” Bailey remembers.

While the Baileys met at Ed’s first store, they didn’t date until a few years later. After Ed sold his store, he was in North Carolina working for the Brand and Colleen continued to work as a manager at Sears in Maine.

In 1978, when Colleen married Ed Bailey, she was still working at Sears. Although she knew the retail business, she didn’t have a desire to be part of Dunkin’.

“At the time, I wasn’t interested in the donut business,” says Colleen. “As we had our four children, Ed traveled a lot for the brand, and so I became a stay-at-home mom, volunteering a lot of time at the kids’ school and in the community.

Colleen also worked at the kids’ school bookstore for five years as the manager, purchasing supplies and stocking merchandise.

Ed Bailey’s role at Dunkin’ required him to travel throughout the United States to help open new stores. During the 1980s, he even spent a lot of time in Canada.

When he decided to retire in 2001, after 36 years in the business, Colleen got the itch to dabble in Dunkin’ herself.

“Our older kids were in college and our youngest was seven. I was itching to get out of the house and wanted to use my resources and talents to start a small business,” she says. “We thought it’d be a nice retirement job to own two stores in Skowhegan, Maine. Then it kept growing.”

Today, the Baileys own nine stores throughout Maine, including one in Unity, a town in which both of their parents and grandparents lived at one time, they recently discovered.

“It just seems Dunkin’ was meant to be part of our family,” says Colleen.

While the Baileys have plans to grow their business, they don’t have any plans to spread outside of Maine yet.

“You can never stop growing. It’s really important to keep growing your business for as long as you’re able to,” says Colleen. “While we’ll do that in Maine, I don’t know what our children will do. We hope the business is passed down to them someday.”

Dunkin’ is already in the blood of all the Bailey kids. Three of them are currently involved in the family business. Their son Scott is in his 11th year with the brand working in the same role his dad did years ago, while their son Matthew works as general manager of the family’s network. Their only daughter Katrina works part-time, helping her parents with the financial end of the business.

“Dunkin has always been a part of their lives. Ed took them all to work and they’d make donuts and bagels with him. They’d sit up on the donut bench and help him cut donuts when that was the way to do things,” says Colleen. “They all love Dunkin’. You could say it’s a requirement of being a Bailey.” 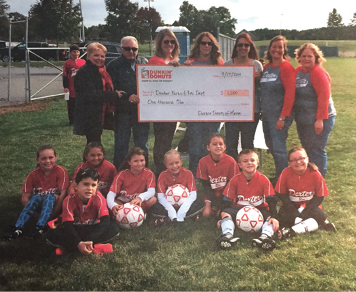 At least once every week, Colleen and Ed together visit all their stores.

“It’s important that our employees know us and understand that we care,” says Colleen. “When we visit, we help out by throwing out the trash or cleaning tables or doing whatever needs to be done. We want our employees to know that we are involved and appreciate them and that we couldn’t be successful without them.”

The Baileys also value creating a community feeling around their stores. They volunteer at many Chamber of Commerce events in each of the towns where they operate stores.

“We give product, coffee, donuts, muffins to sponsor the events, as well as help out the local schools as much as possible,” says Colleen. “Those are the meaningful, fun parts of the job that make it exciting to get out there, meet people and show our love for the community and for the business. It’s rewarding to learn about our communities so we can give back and be as helpful as possible.”

The Baileys are passionate about volunteering their time to the Red Cross. They support the Special Olympics every year, as well. Politically, Ed and Colleen stay focused on advocating for franchisees. They’ve met with local representatives at the State House in Augusta, and have traveled to Washington D.C. to talk with senators and lobby for franchisee legislation. 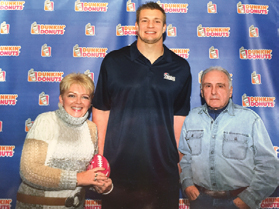 Colleen is active on several committees. She is on the Maine Dunkin Ad Committee, which has allowed her the opportunity to help make decisions on product advertising, and has been a frequent guest on local radio and television stations. She is co-chair of her District Advisory Council (DAC) and sits on the Regional Advisory Council (RAC). She also serves on the Development Committee and hopes to one-day continue her service to the Dunkin’ franchisee community by serving on the Brand Advisory Council (BAC).

“I’m honored and privileged to be a part of these, and I’ve always been welcomed. Being the only female often times when I go to meetings isn’t easy, but I’m always welcomed and listened to,” says Colleen. “I’m strong-willed and determined and want to make a difference by representing the franchisees as much as possible.”

Of all the Baileys do, they both agree their favorite part is meeting people. “It’s a people business. You’ve got to love people in order to survive,” says Ed.

While being franchisees can be difficult and requires tireless hours of hard work, Colleen says it all comes down to this.

“We are big on being local and letting people know that we’re family owned and support the community. We love what we do. We love the lifestyle Dunkin’ allows us to have. And we wouldn’t have it any other way.”