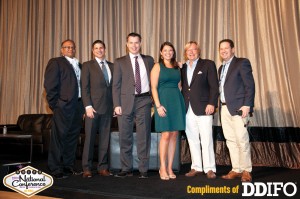 Photo By Zoran Dobrijevic. View more photos from the National Conference in our Galleries.

After hosting its National Conference at resort hotels at Mohegan Sun Casino in Connecticut and Caesar’s Palace in Atlantic City, DDIFO Executive Director Ed Shanahan decided to take the show to Las Vegas. The distance from the franchisee association’s New England headquarters was great, but Shanahan knew that a Las Vegas destination would send the right message, that DDIFO is a national organization with reach across the entire Dunkin’ Donuts footprint.

The 2014 DD Independent Franchise Owners National Conference and Hall of Fame Gala was a huge success. The winners were the franchise owners, the sponsors and the organization. The house made out pretty well, too as DDIFO contributed its part to the Rio Hotel’s bottom line for 2014. The conference provided useful industry content for franchisees from such notables as an FBI agent specializing in cybercrimes, a former restaurant CEO and DDIFO’s estimable restaurant analyst, joined by leaders from the Brand Advisory Council and National DCP. As Shanahan put it, “The National Conference is this organization’s opportunity to address major issues of concern to Dunkin’ Donuts franchise owners in an environment that is focused entirely on what franchise owners need to operate their restaurants and maximize profits.”

In a world where information travels in a nanosecond and people can go online to find out almost anything, face to face communication still matters. One of the most important and well received components of this year’s DDIFO National Conference was the discussion of brand and franchisee issues which came under the heading “Talking BAC” and was headlined by a keynote address from Brand Advisory Council co-Chair Clayton Turnbull.

Turnbull, who entered the DD system in 1992, focused his remarks on one primary issue: change. He noted that for seven years Dunkin’ Donuts has earned top rankings in national surveys on customer loyalty.

“Overall, this brand is in good shape now. We know there’s more that we can do and we have to do it, because our world is changing faster than we can understand. Our customer’s lifestyles are changing in years, not decades,” he said.

He emphasized to the crowd assembled in the Brasilia Ballroom that change will be reflected in managing the menu and pushing new product innovation into the marketplace—even if it is not 100 percent ready.

“In today’s world, if you wait for 100 percent ready to roll, you are going to get rolled over; you’ve got to take a little bit of risk.”

Turnbull also turned the discussion to the DDIFO, suggesting the organization change its focus to provide more research and analysis for Dunkin’ Donuts franchisees and the BAC.

Conversation with Franchisees - Watch the Video

Like other great national brands, Dunkin’ Donuts franchises are operated with great uniformity and consistency, but operators from different parts of the country face different challenges. Some of these were highlighted in a spirited discussion among franchisees led by Rob Branca, who operates a network in Massachusetts, Ohio and Florida.

“One of the things we talk about is that [Dunkin’ Brands] management is not in the same business we are,” said Branca. “DDIFO can have a role facilitating better lines of direct line of communication on issues of concern at the ownership's bottom line level.”

“DDIFO has been an incredible resource for me, this is my third DDIFO national meeting. I’ve found DDIFO is an organization that can help me be a better operator,” said Bryce Bares, a recent franchisee from Nebraska.

For this discussion, Bares was joined on stage by Charles Cutler from Florida, Hank Huth from Arizona and Washington, D.C., Brianne Medeiros from Massachusetts and Vishal Shah from Chicago. The group was seated comfortably on couches and soft chairs for a 90-minute conversation touching on issues from the value of an independent franchisee association to the challenge of appealing to new customers in established and emerging markets.

“It [the relationship] is better than it's ever been but, I am starting to see if things don’t pan out, it can be a volatile future. We may need the support of DDIFO and to have it there and not to have to create it is huge,” said Cutler. “I think if DDIFO is used correctly, it is a check and balance system for the brand and I can see the value now that I didn’t see before.”

On the subject of competition, Shah a second-generation Chicago franchisee who also operates one of the largest central kitchens in the system, said, “I think at its best, DDIFO is a vehicle that can protect interests of franchisees while promoting the interest of the brand. It truly is a working partnership.”

“It’s good that there is an organization like this that has the opportunity to push back if needed,” said Huth, a self-professed franchise junkie who has developed restaurant concepts such as Boston Chicken and Einstein Bagels in addition to Blockbuster Video stores during his career.

The group reflected on different competitive issues they face in their markets, but all agreed on the importance of appealing to new, younger customers who will make up the core of Dunkin’s audience as older customers retire. Medeiros referred to those pending retirees as the “medium hot with cream and sugar” crowd.

“We need young people to come in and realize we have different swirls you can try and mix into beverages. We have to let them know we have that available.” Medeiros said she uses free samples to appeal to new customers. “It’s as simple as putting something free in front of them one time and knowing that, on this day, they will try something new just to get them to come in and try something new the next day,” she said.

Huth’s choice for drinks that appeal to Gen Y? “I’m going with iced coffee. I think that is a drink of choice outside of New England that has the chance to skew younger, especially with the different flavors we can put into it.”

“I do think our future is in the iced beverage business,” said Cutler, who believes Starbuck’s is a chief competitor not only because of their slate of customizable frozen and iced drinks, but also because of the experience the brand creates for its younger customers.

“What they care about is: Is it relevant, is it cool, do we want to be seen there? And I think that’s where we lose out to Starbucks. We are not as cool and relevant.”

Gordon noted while the DNKN stock price was well above the July 2011 IPO, pressure remains to improve same store sales and initiatives to bolster the top line could impact franchisees.

Commenting on McDonald’s lackluster stock performance, Gordon said, “The majority of the McDonald’s fall-off occurred in the lunch and dinner hours. While breakfast was said to be higher, it appeared to be driven by deep product discounts, which do not positively benefit franchisees or the brand over time.”

One of the greatest outside threats to Dunkin’ Donuts franchise owners doesn’t come from any individual business or entity. It comes from hackers, just ask Staples, Home Depot, Target or any of other brand name corporations that have been hacked. Online vulnerability is a costly proposition, both on the bottom line and in the minds of the public. It’s estimated a data breach can cause $80,000 in damages and fees to the owner of a single Dunkin’ Donuts location.

“One in six franchisees will suffer a credit card breach in the next 24 months.” Wayne said. “Ninety-eight percent of breaches originate from organized crime.”

Hector Sepulveda, an agent with the Las Vegas office of the FBI who investigates cybercrimes, joined Wayne on stage at the National Conference and made this point: “You are a target, you might not think so because you are a small business, but you are a target and if you’re hacked, you are responsible for the damages.”

Sepulveda, who investigated gang crimes before focusing on cyberspace, pointed out that attacks get more sophisticated each year and Point-of-Sale (POS) systems running on older software systems like Windows XP are even more vulnerable.

According to Wayne, 70 percent of breached locations are out of business within one year of the attack. “The first thing I hear from a franchise owner,” Wayne said is, “Gee I wish I had known.”

Robert J. Hoffman was chief executive at Ponderosa and Bonanza Steakhouse, a steak and buffet concept he led through bankruptcy reorganization. Today, he is the President and owner of RJH Hospitality Consulting LLC, and owner of a Fricker's Wings, a sports bar franchise concept. In his closing keynote address, he told National Conference attendees that franchisors and franchisees are often focused on different issues and different metrics.

He offered his view on the Burger King-Tim Hortons merger. “I’m not sure Burger King is not a threat [to Dunkin’ Donuts]. As a CEO, I’d be worried that Tim Hortons has a great coffee product and they now will have 7,000 U.S. outlets they can put coffee into. That’s 7,000 competitors for all of you.