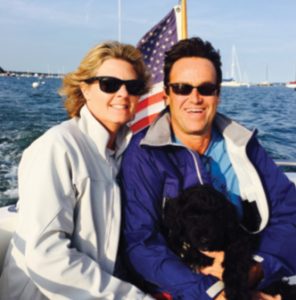 There’s an old proverb that says, “Smooth seas do not make skillful sailors” – with the logical corollary being that rough going will surely forge good men of the sea. Such could be said for former Merchant Marine Todd LaLumiere, who after a rocky start and a series of subsequent obstacles along the way, has found success as the owner and operator of Maritime Coffee Time LLC, a six-store network of Dunkin’ Donuts franchises in the Annapolis, Maryland area.

LaLumiere endured many of the usual struggles that franchise operators encounter when launching a business – such as finding good help and store locations – but he also had to persevere through a host of other challenges, including seeing the bank that was financing his operations go under during the recession, then having his contractor make off with his construction deposit immediately thereafter. But like a sea captain navigating a schooner through a raging nor’easter, he has pressed on, eventually finding the calmer seas that come with time and experience.

LaLumiere began his professional seafaring life after graduating from Maine Maritime Academy, where he earned a Bachelor of Science degree in marine engineering. It was there that he met his wife Lisa. They married when he was 23, and started a family soon after.

“And the only way we could [make ends meet] was for me to ship out,” he says. “And I hated it. I was in a union and I made good money, but it was really, really hard – hard on the family, hard on me.”

During his stints at sea he studied for his real estate licenses, and when he was on shore he sold residential and commercial properties. Then he learned construction, building two houses and a day-care center for his wife, which she still operates. Later, he redeveloped and sold three apartment buildings in the Portland area. “I sold them too cheap and too soon,” he laughs. But while the real estate dealings were providing extra income and another valuable skill set, he acknowledges that there was another motivation behind the second career, “I was always looking for a way to not ship out.”

The opportunity for a landlocked life presented itself one day when he was traveling to Lowell, Massachusetts with his eight-year-old son for a youth hockey tournament. He and another hockey dad were standing in line at a Dunkin’ Donuts located inside a gas station, when his friend off-handedly mentioned that his brother-in-law was the general manager for an entity that owned 70 Dunkin’ stores. When told that the operator of that C-Store made $150,000 a year, he replied, “Geez, I don’t even make that when I go to sea – even with a chief engineer’s license. How do I get in?” And that was the opening chapter of his career as a franchise operator. 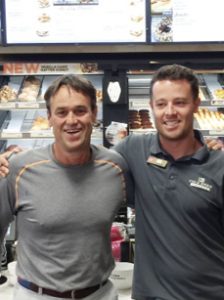 LaLumiere impressed the Brand and was offered a development agreement in one of three markets: Philadelphia, Southern New Jersey, or Baltimore/Annapolis, Maryland. He chose the latter, because of his connection to the area. “I’m a sailor, and all my friends are sailors,” he says. “My Merchant Marine union was headquartered in Baltimore, the school where we receive our continuing education is on the eastern shore of Maryland, and I also had a couple of buddies from Maine Maritime that were Chesapeake Bay pilots. So I had a little toehold in Maryland already.”

It was February, 2003 and LaLumiere signed a three-store SDA.

The kids were still in school and his wife owned and operated the daycare center, so each week LaLumiere would travel from Maine to Maryland to get the groundwork done for his first location. While away, he lived like a sailor onboard an old sailboat in Chesapeake Bay, which he weatherproofed to protect himself from the elements. In the colder months, he stayed warm using a portable space heater, and he showered in the marina each day.

Soon after, he opened his first store in the town of Stevensville, a historic community at the eastern end of Chesapeake Bay, about 15 miles from Annapolis. It didn’t take long for this experienced sailor to feel like he was taking on water.

“Except for working in a pizza parlor when I was a teenager, I had zero fast food experience, and the next thing you know, I’m a Dunkin’ Donuts/Baskin Robbins [franchisee] making donuts all night,” LaLumiere recalls. “I live 500 miles away, I have no infrastructure, no family, and no support. And then my general manager quits on the third day after I took him through all the training. It was nuts, 24 hours a day, and I had my second store on the way.”

Feeling overwhelmed, he reached out to his hockey buddies for help, and they came through. One friend, a lawyer with whom he had skated on the same line, connected him to a long-time New Hampshire franchisee who had just sold his network. Not long after, a team from the Granite State was on its way to the Eastern Shore to assist with operations. It was a game-changing turn of events for the franchisee, for which he is most grateful.

“Honestly, without the help of the [New Hampshire] franchisees, I would have failed,” LaLumiere admits, adding that he is still in touch with some of the people who helped him through that period. Once he was able to get the operational issues straightened out, the store began to perform well. He ran that location for approximately 10 years, until an underperforming Pizza Hut became available. The restaurant was just 200 yards away, but had direct highway access. LaLumiere bought the property, razed the existing restaurant, and erected a new, much larger store that included a drive-thru and a lobby that has become a meeting place for local business people. 80,000 cars pass by his shop every morning headed to Washington D.C., and that volume has helped LaLumiere’s Dunkin’ became the highest grossing store in the state of Maryland. Where the old location brought in approximately $30,000 per week, the new one grossed $45,000 to $50,000 per week.

After stabilizing Stevensville, he focused on opening his second restaurant, located 25 miles away. LaLumiere then learned another lesson about the Dunkin’ business. “The worst combination of stores to have is two, because you can’t be in two places at one time. You can’t make enough money to have a general manager or a multi-unit manager, so it’s basically full hands-on,” he recalls.

When it came to opening store number three, new struggles ensued. First, a delay caused him to forfeit a deposit, terminating his agreement, but the overall business eventually stabilized. “You commit,” says LaLumiere. “I had leveraged my house, my wife’s business – everything. But I made it through.” He didn’t know at the time that things were going to get worse before they got better.

In 2007, after signing a new agreement to develop five additional shops and signing personal guarantees to obtain leases, the financial crisis hit. LaLumiere’s bank went out of business. Then, to makes matters worse, his contractor skipped town just days after beginning construction with the deposit LaLumiere had paid. “So I’m left with a 12-foot wide hole in the wall, no financing, no money and no contractor,” he says, “but over time we just persevered and things worked out.”

Everything changed for the better when he got store number four up and running. “When [that one] opened, the numbers changed – all the metrics the banks use – and then it really started to work financially,” says LaLumiere. “Everyone says it takes five years [to get a small business to work], and that’s when I started to make money.”

In 2011, he purchased a building in the historic district of Annapolis, and while the store has yet to become profitable, the value of the building has increased considerably since he bought it, and he has the added bonus of maintaining his home office in the building.

LaLumiere says that although his wife Lisa lives 500 miles away, she has played a large role in the success of the business. In addition to handling HR functions, she has also helped develop a people-first culture for the company, one which emphasizes a work-life balance and recognizes employee excellence with a bonus structure.

Their oldest son Matthew is now working for the family business; their daughter Margo, a CPA, assists with a number of business functions and their youngest, a son named Charlie, just graduated from Dartmouth College and is planning to pursue a career in real estate, through which he can assist that element of the business.

Now a total landlubber, LaLumiere says he has enjoyed his time as a Dunkin’ franchisee. One of the parts he likes best is “that you are able to own the real estate, unlike a lot of franchises. It provides you with the assurance that you can’t lose your location. You can also stabilize your costs because your rent won’t be escalating by three or four percent per year. And from an ownership perspective, that’s a real advantage, even though it is expensive initially to buy the property.”

But it is his experience as an engineer in the Merchant Marine that has served him best, particularly from a practical standpoint. Recently, the roof on one of his buildings was leaking, so he just climbed on the roof, squeegeed off the water, and repaired the leak, and “not everybody is going to be able to do that,” he says.

Long before he was up all night baking donuts, LaLumiere had learned what it means to work.

“When I came here as a merchant marine guy, I had never heard of somebody not coming to work – because I was on a ship!” he jokes. “If you’re showing up late for work, we’ll leave you at the next port. So when I came into the food service business and found that when an employee doesn’t show up for work, they just walk in the next day as if nothing ever happened. And I’m thinking, ‘What is wrong with you?’ And then I realized it was a different world– welcome to fast food.”