By Carl Lisa, Esq.Published August 23, 2015Category A Look at the Law 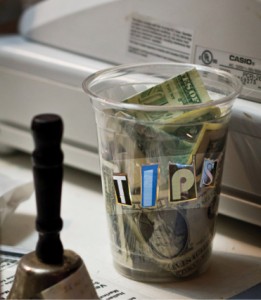 The Massachusetts tip pooling law, which prevents managers from taking a cut of the tips left for servers, has been the subject of close scrutiny. Several franchise owners have been sued for allowing managers and supervisors to share the tips, and DDIFO has provided testimony for lawmakers explaining why the law is confusing and needs clarification. The law has forced many franchisees in Massachusetts to ban tipping altogether.

Constantine Scrivanos is among those who banned tipping in most of his shops, but he was nonetheless sued by a group of employees who claimed the no-tipping policy violated the law. The case made it all the way to the Massachusetts Supreme Judicial Court and provided DDIFO the opportunity to file an amicus brief. In April, the court ruled against the employees and clarified answers to important questions raised under the Massachusetts Tip Act (G.L.c.149 S 149).

The facts of the case are pretty straightforward. Scrivanos implemented a no-tipping policy, which required that signs be posted at various places in all his shops, clearly stating that there was no tipping allowed and/or thanking customers for not tipping. The policy also directed employees to communicate the policy to customers. In the event change was left behind, it could be placed into an abandoned change cup commonly known as a “take a penny leave a penny” cup, or put into the cash register.

The lower court found that the no-tipping policy did not violate the Tips Act, but ruled putting the money in the register, was in violation of the Tips Act. Later, a different lower court judge, responding to a motion for summary judgment, certified two questions to the Supreme Judicial Court.

1. Whether the Tips Act permits an employer to maintain a no-tipping policy.

Here the court did not accept the plaintiffs’ (employees’) view that the plain meaning of the statute required an interpretation that a no-tipping policy could not be maintained by the defendant. To the contrary, the Court found that the Tips Act contained no prohibition against such a policy.

2. Under what circumstances can an employer be liable seeking to enforce a no-tipping policy, notwithstanding such a policy, where tips or loose change are left by customers and are retained by the employer?

The court gave further guidance to employers as follows:

“A clear communication of the no tipping policy could be accomplished through the posting of signs such as those conveying that employees may not accept tips. In addition employers could instruct wait staff employees to convey to customers orally that the store maintained a no-tipping policy, and could provide training regarding the content of the communication, as well as when during various points of interaction with a customer the information should be conveyed.”

What is the takeaway? Clearly the court emphasizes communication to maintain compliance with the law. That’s means placing signs which cite the no-tipping policy and the effect of loose change left at the point of payment, in the store and at drive thru windows. Plus, ensuring employees understand their responsibility to clearly communicate the policy to customers who want to leave a tip, will assist in complying with the law and could help avoid future lawsuits.

This publication is not intended to constitute legal advice. If legal advice is required, the services of a competent legal professional should be obtained.