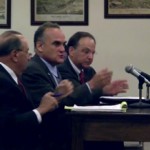 On June 29, 2011 members of the Committee on Community Development and Small Businesses— representing the Massachusetts State Senate and House of Representatives—heard testimony on a bill sponsored by Senator Brian Joyce (D-Milton) to amend the General Laws of the Commonwealth to benefit franchisees.

The bill, SB 1843, would “level the playing field” for small business people who enter into a franchise agreement with a franchisor, according to DDIFO President Jim Coen, who was one of several interested parties offering testimony at the hearing.

There are over 15,000 franchise businesses in Massachusetts whose total economic output to the state is greater than $49 billion, according to the International Franchise Association. Franchise owners invest hundreds of millions in local communities—creating jobs, paying property and payroll taxes and supporting local Little Leagues and other organizations.

“As franchising has flourished over the last 50 years, franchise agreements between franchisees and franchisors have become more and more one sided to the benefit of the franchisor,” said Coen. “Franchising suffers when franchisors abuse the power granted them in their franchise agreements and wipe out the equity that’s been built and the personal money that’s been invested because they want to take your franchise and sell it to someone else—someone with deeper pockets who can pay higher fees,” he testified.

Franchise attorney Eric Karp, partner in the Boston law firm Karp Warner & Ryan, told the committee, “Franchise agreements are generally presented to franchisees on a take or leave it basis, with negotiations usually ruled out.  These agreements are heavily one-sided in favor or the franchisor, usually an out of state company. This is result of the overwhelming imbalance of legal and financial resources between the franchisor and the franchisees.”

SB 1843 includes language that would balance the terms. It says, “The franchisor is obligated to act in good faith and shall not refuse to renew a franchise for arbitrary or capricious reasons. For the purposes of non-renewal, good cause shall mean cause based upon legitimate business reason, and includes the franchisees failure to comply with any material lawful requirement contained in the franchise agreement.”

Stan Furash was operating two Dunkin’ Donuts franchises in Bradenton, Florida when, in 2009, Dunkin’ terminated his franchise agreement.  “Dunkin Brands terminated us because they claimed my wife abandoned the business, which to me was a farce because the shops were doing better than ever before, and there was no mention of abandonment in the franchise agreement, besides there are many successful franchisees that operate in multi states. Our situation was better than that because I was paying attention to these two shops every day.”

Furash says while he ran the two stores he increased annual revenue from $1.5 million to $2 million and couldn’t understand why he was being targeted. He fought the termination, draining his savings to pay the associated legal fees. In the end he lost because he says, “The deck was stacked against me, and they held all the cards.”

Furash was ultimately forced to shut the doors and turn off the lights. “Our bank foreclosed as we could no longer pay the bills.  Forty good people were put out of work. My financial situation is a disaster. At 57 years old I am forced to start over. We have little or no ability to pay for our children’s college and have to start saving for retirement at a very late age. It still doesn’t make sense to me.”

For long-time franchise owners, renewing their franchise agreement can be an eye-opening experience. Attorney Carl Lisa, founding partner of the Providence firm Lisa & Sousa, LTD. has worked with Dunkin’ Donuts franchisees for over 40 years. He told the committee that franchise agreements have changed dramatically and rewrites typically lessen franchisee rights.

Lisa cited several changes to the franchisee/franchisor relationship he has witnessed during his career including: requirements for additional capital investments with little contribution from franchisors; expanding default clauses that allow for only one strike before the franchisee is out; and encroachment.

Franchise attorney Robert Zarco, founding partner with Zarco, Einhorn, Salkowski & Brito, P.A. in Miami, says encroachment is pervasive in franchising and franchisees are often unable to protect themselves from cannibalization because of their competing interests. Franchisees are focused on bottom line profitability while franchisors focus on the top line since they that derive revenue as a percentage of gross sales.

“This bill levels the playing field by requiring franchisors to think long and hard and conduct accurate impact studies as they would now be liable to compensate the existing franchisee for the adverse impact caused by lost sales, unless the franchisor satisfies certain conditions and exceptions under the statute,” he said.

According to attorney Karp, existing franchise agreements have removed “long established constitutional, statutory and rules-based rights” for franchisees seeking to resolve disputes with their franchisors. While Senator Joyce’s bill does not directly address whether franchisees can file class actions or expect trials by jury—issues highlighted in Karp’s testimony—the bill does allow franchisees to recoup legal expenses if they win a judgment. Current franchise agreements require franchisees to pay the franchisor’s legal fees even if they win their case.

Lisa cited the 2008 Rhode Island Fair Dealing Law as an example of franchise legislation that has balanced the legal rights of franchisors and franchisees. He also reminded lawmakers that as that bill was being considered, opponents predicted a drop in franchise business and job cuts. Those predictions proved untrue as they also did in Wisconsin, Iowa and other states that passed fair franchising legislation. In fact, Dunkin’ Donuts is presently advertising to find potential franchise owners for new developments in Wisconsin and Iowa.

The joint committee is reviewing SB 1843.