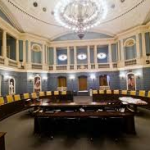 Last week the Massachusetts Senate a jobs bills that aims to promote economic development.  In total, Senators filed 126 amendments to modify Senate Bill 2350. One such amendment offered by Senator Rodrigues and Senator Tarr would bring clarity to the Massachusetts tip pooling law.

Amendment #76 that we offered would replace Massachusetts’ vague tip pooling laws with the Federal Fair Labor Standards Act’s language, which would remove the confusion of who should be allowed to share tips.

Unfortunately, the amendment did not pass. It was defeated in a close roll call vote of 17-19. Posted below is the actual roll call vote made yesterday by the members of the Senate.

Be sure to Watch Senator Joyce, Senator Rodrigues and Senator Knapik, all of them did a great job.

Tips Cup Debate 1 from Senator Brian A. Joyce on Vimeo.

Check to see how your Senator Voted!