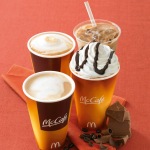 The fast food giant—which touts convenience and value—continued to benefit from a weak global economy. The restaurant’s $1 menu, as well as new coffee offerings from its McCafe services won over consumers. The company met or beat its targets in every region, but sales gains were the strongest in Asia and Australia, the company said.

“For October, despite a declining informal eating out market around the world, we expect consolidated comparable sales to remain positive,” said CEO Jim Skinner in a statement.