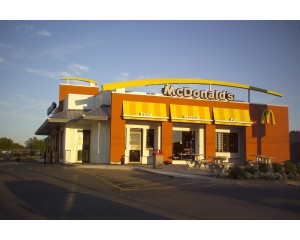 Janney Capital Markets McDonalds Franchisee survey was released this week highlighting some interesting facts and statistics from under the Golden Arches.  Same-store sales grew slightly (up 0.6%) in March and April when looked at collectively, although the increase was largely driven by restaurants in McDonald’s East division, (up 1.3 percent which offset flat same-store sales in the West and only a 0.4% climb in the Central division).  The franchisee survey calculates results from 27 owner-operators who collectively own 219 stores – 86 units in the East division, 44 in the Central and 89 restaurants in the West division.  Numbers aside, it was also especially interesting to note that the franchisees’ assessment of their current relationship with McDonald’s Corporate has improved very little in the past three months.  The 1.73 rating was only slightly better than the 1.70 rating from three months ago and well below the usual grade of 2.10 for relationship.  Similarly, the outlook of franchisees for their business growth over the next six months came in at 2.21 for an average outlook, but down significantly from their historical average of 2.90.  Last quarter’s outlook was down to a 1.89 rating.