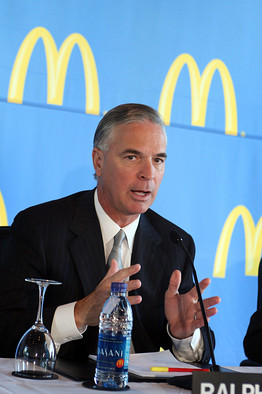 McDonald’s Corp. has been one of the world’s most successful big companies during this recession. Last Monday, the fast-food giant posted February sales results that most chains would envy.

But the worsening global economy has McDonald’s preparing for a more difficult year. The strengthening U.S. dollar is knocking the wind out of McDonald’s profit-generating power. While Americans are flocking to McDonald’s as a cheap alternative to sit-down meals, that’s not the case in some parts of Europe and Asia.

How McDonald’s tackles these challenges falls to Ralph Alvarez, a Cuban-born former accountant who is McDonald’s president and chief operating officer. Mr. Alvarez, 53 years old, has helped the Golden Arches extend a six-year success streak with his focus on improving restaurant operations, adjusting prices and keeping down costs. He is widely expected to succeed Chief Executive Jim Skinner once the 64-year-old retires.

Mr. Alvarez is pruning gas-guzzling cars from the company fleet, pressing media buyers to negotiate lower advertising rates and putting the brakes on building new outlets on street corners where nearby development shows signs of weakness. At the same time, he’s overseeing big investments in the most promising aspects of McDonald’s business — coffee drinks that compete with Starbucks and improved drive-through windows that increase sales and efficiency. To check on operations, he disguises himself in a baseball cap and sunglasses and visits McDonald’s outlets unannounced.

In February, McDonald’s same-store sales world-wide increased 5.4%, after stripping out a calendar shift from last year’s leap year. By that measure, U.S. same-store sales rose 6.8%, while sales in Europe increased 4% and rose 4.1% in the region that includes Asia Pacific, the Middle East and Africa.

Over the summer, Mr. Alvarez met with each department at headquarters and went through their spending seeking to trim costs. He told workers to cut travel and instead hold meetings at the company’s Hamburger University in suburban Chicago. Employees who get company cars could no longer select gas-guzzling vehicles, and those that already had them must pay a higher personal-usage fee.

As the global economy worsens, executives are trying to prepare for what Mr. Alvarez calls the “what ifs” that come with an uncertain environment. After several years of developing higher-priced products, such as specialty salads, the company is putting more emphasis on creating and marketing lower-priced items, and it’s implementing computerized systems in more outlets that allow restaurants to adjust prices based on customer demand. In China, some restaurants recently cut the price of certain combo meals at lunch by as much as one-third.

Behind the effort is an increased focus on examining reams of customer data measuring everything from whether customers are trading down to smaller value meals or dropping Cokes from their orders to exactly how much they’re willing to pay for a Big Mac. “I love numbers,” Mr. Alvarez says. “I think data used well really tells a story.”

Don Armstrong, a franchisee who owns 14 outlets in Oregon, says he’s more careful about raising prices at outlets in economically depressed areas than at ones in more affluent areas. “It doesn’t do you any good to raise prices if you lose customers,” says Mr. Armstrong, chairman of a council that represents U.S. franchisees.