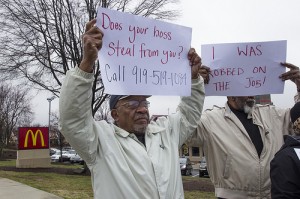 photo credit: Grant Baldwin Photography via photopin cc
Attendees hold up signs at a press conference held in front of a McDonalds location in Charlotte NC regarding a class action lawsuit against the McDonalds Corporation accusing the company of wage theft.

Any members who aren’t too worried about whether or how the President’s overtime order should pay special attention to the fact that McDonalds was sued this week by a number of employees in California, Michigan and New York.  The class action lawsuits filed in both federal and state courts claimed that the “Golden Arches” were systematically stealing wages by forcing employees to work off the clock, shaving hours off their time cards and not paying overtime, among other charges.  With exceptional speed, the New York lawsuits were settled before the week was out with the franchisee agreeing to close to $500,000 in payments to underpaid workers.   The Michigan and California suits are moving forward.  With overtime issues being so much in the news of late, it seems timely that Sesco Management (mentioned above re: Obama’s Executive Order on Overtime) released a report from their 2014 employment audits identifying overtime violations as THE biggest threat to employers.