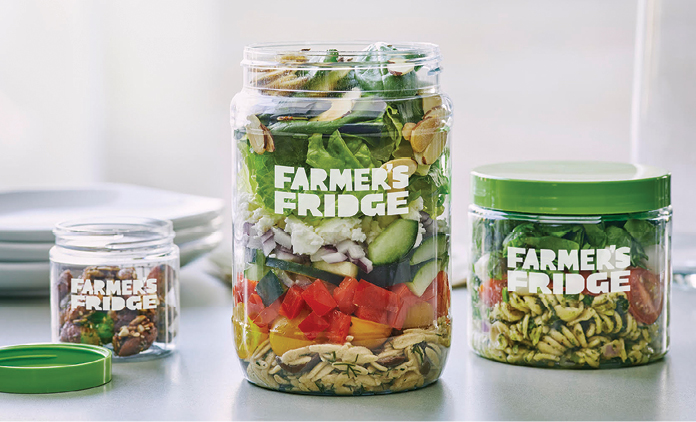 Most would agree that a salad and coffee doesn’t evoke the same feeling as a donut and coffee. But, prepackaged salads have made their way into six Dunkin’ shops—three in Chicago and three in Clark, New Jersey, about 25 miles west of New York City. The Chicago-based company, Farmer’s Fridge, is supplying Dunkin’ the salads for a three-month pilot program that ends in March. And, while no one is expecting franchisees to start building salad bars in their lobbies, there is interest in learning whether the quintessential health food will find an audience in a shop known for coffee and treats.

Farmer’s Fridge was founded in 2013 and promises “handmade meals and snacks, using local partners and seasonal ingredients whenever possible.” Salads are packed in jars and sold across the country in refrigerated smart vending machines in places like office buildings, college campuses, airports, and public spaces. The company sold 3.7 million meals in seven years, through 400 vending machines in six states. But because the pandemic dramatically reduced customers in those places, Farmer’s Fridge CEO and founder Luke Saunders went looking for new outlets to sell his wholesome, healthy food. The program with Dunkin’ marks its first with a quick-service restaurant.

In an interview with the Chicago Tribune, Saunders said that the Dunkin’ partnership fits with his company’s mission to “make fresh, healthy food as accessible as a candy bar.” He is hopeful the pilot leads an expansion across the Dunkin’ footprint. “If we can figure out how to put this in every Dunkin’, we would absolutely do that,” Saunders told the paper, adding he has more restaurant partnerships in the works.

For Dunkin’, which has been peppering its menu with healthier choices for years – most recently with the plant-based Beyond Sausage patty and oat milk – a bowl (or jar) of greens might just fit the model. In fact, Farmer’s Fridge is providing the Dunkin’ test shops with more than traditional salads. There are grain bowls, harvest salads, Greek salads, pesto pasta bowls and pineapple coconut chia pudding. According to a statement Dunkin’ provided to Independent Joe, “The test is designed to gather valuable feedback from consumers, franchisees, and their employees to help inform future decisions.”

According to data from the foodservice consulting firm Technomic, Dunkin’ customers do not express above-average interest in the availability of healthy items. “Additionally, they do not prioritize ‘unique items’ any more than the overall consumer average,” says Lizzy Freier, a senior research manager at Technomic. But she understands the brand’s attempt to connect healthy options with its on-the-go, “America runs on Dunkin'” image. “The addition of numerous plant-based options and nonmilk coffee options certainly indicates dedication to improving consumer perceptions in this area,” she says.

Dunkin’ Brands echoed her sentiment in its statement to Independent Joe. “Dunkin’ is committed to delivering a wide variety of delicious, convenient menu choices to help keep our guests running all day long, including options that make it easier to eat on-the-go.”

Freier believes the pandemic – on top of Dunkin’s focus on beverages and streamlined back-of-house operations – likely led to the decisions to pilot grab-and-go salads. “I also see the success of snack boxes at Starbucks as a possible inspiration to evolve,” she says. “It also speaks to increased consumer interest in grab-and-go from a safety standpoint, as the pandemic has impacted how consumers approach food safety.”

“It’s not that these chains don’t want to offer [salads and other fresh meals], it’s that the supply chain has made it hard in the past. Seven years in, we are able to provide a solution to solve a problem,” he said.

DDIFO Restaurant Analyst John Gordon, founder and principal of Pacific Management Consulting Group, agrees. Given the food trends at Dunkin’, Gordon says Dunkin’ would not want to take on the process of assembling salads from behind the line, but isn’t opposed to trying it out and earning a small commission along the way.

Gordon says former McDonald’s CEO Don Thompson is the one who connected Dunkin’ with Farmer’s Fridge. Thompson is an investor in the company (and in Beyond Meat) and runs a venture capital fund called Cleveland Avenue.

“Don has a food-incubator company in Chicago. He is a creative type and this ‘vending salad’ is right up his alley,” says Gordon. “The purpose of a small, limited pilot like this is to test, and that is what they are doing. No risk to Dunkin’; Don’s company most likely has all the risk.”

What do customers think?

Jamie Dejuras, who owns the three Chicago stores piloting the salads, told Independent Joe it was too early to comment. However, he said he is interested to learn how customers respond to the salads. Independent Joe conducted an unscientific sampling of customers at the 3310 West Addison Street store. Of those interviewed, none had tried the salads yet. Comments from two of the shop’s regular customers gave us the opposing viewpoints to having salads on the Dunkin’ menu.

Jim has been a loyal regular of the Addison Street Dunkin’ for 20 years. While his go-to items are coffee and donuts, he says he would be willing to try a salad. "Why not? Salad can go with a donut or coffee, or by itself," he said, creating a scenario where he would return to purchase one. “If my wife said she wanted a salad, then I’d come here, get her a salad and grab my coffee and donut. We’d both be happy."

Amanda turns to Dunkin’ for breakfast, and says a salad doesn't stir her appetite. “I don’t think I’d try it. I think of Dunkin’ having breakfast food, and salad doesn’t seem like a breakfast food,” Even if it was, she said, “I still wouldn’t buy it from here.”

With the pilot program nearing a close, Dunkin’ has not publicized any next steps. But what is clear is the brand’s ongoing commitment to healthier offerings. Going back to the days of the DDSMART menu, Dunkin’ has always been comfortable featuring a healthy option along with sweet treats. With health and cleanliness concerns atop customers’ minds, Farmer’s Fridge may just be the next big thing customers want. The question is whether they would stop at a coffee shop to get their salad fix—along with a medium iced and a donut. 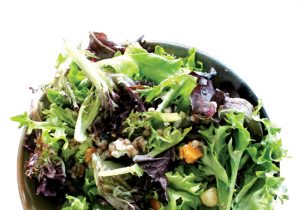 In order to describe salad consumption by the U.S. population, in 2018 the U.S. Department of Agriculture, gathered information based on one day of 24-hour recall data collected in its report, “What We Eat in America.” In its research, the term “salad” refers to raw vegetable-based dishes and excludes items such as pasta salad, potato salad, and tuna salad. Here are some highlights of the findings.

• One out of five people (20 percent) consumed salad on the intake day. The percentage was higher among females (23 percent) than males (16 percent).

• Salad consumption was more common among those with higher household incomes, especially among middle-aged and older adults.

• More than 50 percent of salads were purchased at a store. The next common place to purchase a salad was at a full-service restaurant (among adults) and a cafeteria (among children age 6-11 years and teenagers).

• The vast majority of salads were consumed at either dinner or lunch.

• On the day they were consumed, salads contributed 11 percent of total daily energy for adults and 9 percent for children, along with considerably greater proportions of some nutrients, notably vitamins A, C, E, and K and polyunsaturated fat.