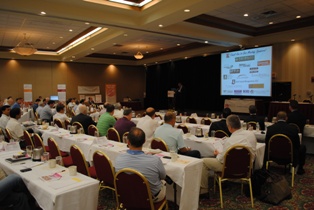 “This was an outstanding meeting,” said one franchise owner from New Jersey. “I not only learned about what DDIFO is involved in, I also heard news from BAC members I had not heard before.”

A spirited discussion involving five members of the Brand Advisory Committee (BAC) who represent the Mid-Atlantic region, was led by Jim Cain, a long time franchise owner and former BAC co-chair.  The panel took questions from the crowd of more than 50 franchise owners and Cain addressed the role DDIFO plays in conjunction with the BAC to advocate for franchise owners’ interests.

Jim Coen, President of DDIFO, kicked off the day-long session explaining how DDIFO has evolved in the last two years to a larger, more dynamic group led by a professional board of directors. But the key point Coen made was that the inclusion of franchise owners from the Mid-Atlantic region would enhance DDIFO’s influence and effectiveness.

“There is strength in numbers—no doubt about it. Today people have the sense that we are growing and that DDIFO is moving in the right direction.”

Coen said the recent inclusion of over 400 Dunkin’ Donuts stores from the Chicago region and 52 from the Cleveland-Pittsburgh-Youngstown region into DDIFO happened because DDIFO had rewritten its by-laws to welcome the inclusion of Local Member Committees (LMCs).

“Successful associations must address the needs of members in different regions. That’s why we are welcoming LMCs –to insure there is local representation at DDIFO.”

Six months ago the Mid-Atlantic region organized into the Independent Association of Franchise Owners (IAFO). Tom Colitsas, an accountant from Princeton, NJ who specializes in franchising and represents several Dunkin’ franchise owners, is the executive director of that group.

“Our goal today is to set up an LMC like they did in Chicago so we can become part of DDIFO while maintaining a certain independence for this region,” said Colitsas.

“We are pleased to announce the IAFO will be part of DDIFO,” said Coen. “With your help, DDIFO can be a bigger force to be reckoned with.” 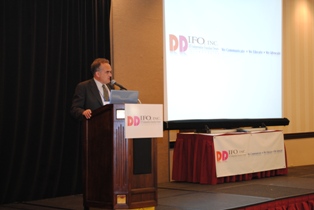 Coen said the specific terms of how the IAFO will integrate with DDIFO still need to be worked out but he is pleased franchise owners from the Mid-Atlantic want to join DDIFO.

That sentiment was echoed by DDIFO Chairman Kevin McCarthy who also made clear the benefits franchise owners receive from being affiliated with an independent organization that is well funded and focused solely on their interests—especially as a change in brand ownership looms.

“This was the reason DDIFO was first formed in 1989, because a corporate raider was poised to take over the company. Now, Dunkin’ is owned by a trio of private equity groups whose motivation appears to be selling the business to reap the profits.”

During a question-and-answer session, franchise owners expressed their concern over some of the initiatives the company has undertaken over the last three years because they have cut into franchisee profits.

Among the featured speakers was attorney Seth Ellis whose law firm, Ellis-Goldberg P.L., works with many Dunkin’ franchise owners to protect assets and ensure smooth succession from one generation to the next. Along with his business partner Gary Joyal of Joyal Capital Management, Ellis detailed how proper planning from advisors who understand the inner workings of the Dunkin’ franchise agreement is vital to providing financial security for franchise owners and their families.

16 companies provided sponsorship support for the Mid-Atlantic meeting. Coen recognized the importance of these sponsors to the mission of DDIFO.

“Because of their support, we are able to put on great meetings like this one.”