Wisconsin police officers “did time” at 14 Dunkin’ Donuts locations in Milwaukee and Madison, staking out rooftops to raise awareness and $16,500 for Wisconsin Special Olympics. 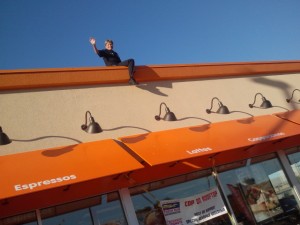 It was all part of a larger fundraising effort held each year called the Law Enforcement Torch Run: 1,000 Wisconsin officers march across the state, carrying the Flame of Hope to honor the nearly 10,000 Wisconsin Special Olympics Athletes who compete each year. Although torch runs are held all across the United States, Wisconsin holds the honor of being the sixth-highest grossing program in the world – 2011’s grand total was nearly $2.4 million!

Wisconsin’s “Cops on the Roof” Dunkin’ Donuts event encouraged customers to stop by, visit their local officers, and contribute to the cause. Anyone who donated received a coupon for a free medium hot or iced coffee, and generous givers of $15 or more also received a free Law Enforcement Torch Run T-shirt. Dunkin’ Donuts also donated $5,000 to the cause.

Kenosha County Deputy Sheriff Ray Merlin noted the famous tie between cops and donuts, saying it goes “way back as kind of a joke.” He then added, “What better way to raise money and awareness for the Special Olympics Wisconsin.”

The Wisconsin rooftop cops event followed on the heels of a similar event held across Illinois, in which  over 130 Illinois Dunkin’ Donuts participated and raised $225,000 to benefit the Special Olympics Illinois.