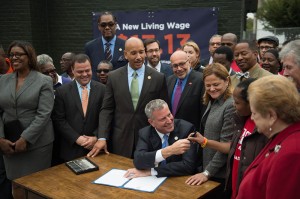 As we get closer to the November elections, the important issue of minimum wage increases continues to make headlines on both coasts and in a host of other communities across the country.  This past week, New York City Mayor Bill de Blasio seemingly took a page from President Obama’s playbook and – by Executive Order – increased New York City Living Wage Law minimum and expanded its reach to cover thousands more employees.  The order, signed by the Mayor on Tuesday, now requires that employers in the Big Apple pay their employees – regardless of the value of the work they do – at least $13.13/hour immediately.  Further, de Blasio’s order provides that the “living wage” will likely increase to $15.22 by 2019!