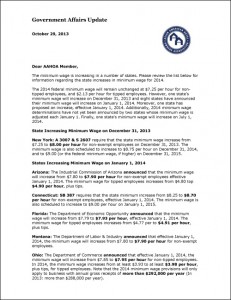 Click to read the full letter regarding changes to minimum wage

We’ve apprised you over months of several states where proposals to increase the minimum wage were being considered.  Our friends in the Asian American Hotel Owners Association (AAHOA) have produced a Government Affairs Update which identifies those states that will increase their mandated minimum between now and July, 2014.  If you own shops in any of the following states, be aware that the minimum is changing or likely to change within that timeframe: NY, Arizona, Connecticut, Florida, Montana, Ohio, Oregon, Rhode Island, Washington, Colorado, Missouri, Vermont and California. We’ve posted the AAHOA piece on DDIFO.org and you can see it here.