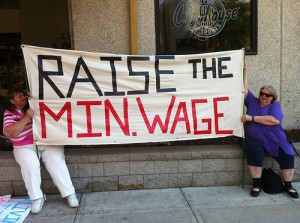 As if Seattle and San Francisco aren’t doing enough to damage an already shaky economy, there are a number of equally egregious and challenging proposals in a host of State Houses across the country and especially on both coasts.  California State Senator Mark Leno has his own minimum wage bill (SB 935) pending in the Golden State which would increase the minimum to $11/hour in 2015 and then increasing $1 in each of the next two years to $13/hour in 2017.  Subsequently, the wage would be indexed to the Consumer Price Index.  The bill is currently pending in the Committee on Bills in Third Reading, last stop before passage by that branch.  And, back here on the East Coast, the Massachusetts legislature has reached agreement on a bill increasing the Bay State minimum wage to $11/hour by 2017.  This compromise stems from differing versions of a minimum wage increase – the House had authorized an increase to $10.50/hour by 2017 while the Senate sought an increase to $11/hour indexed to inflation.  The final proposal, which will likely be approved by both branches, couples the increased minimum wage with an overhaul of the state’s unemployment insurance system, seen as a benefit to businesses with stable workforces.  Previously, the Senate had indexed future minimum wage increases to inflation, which the House rejected.  The final compromise does not index future increases.  Passage of the compromise is seen as likely to forestall a ballot initiative that would increase the state’s minimum wage immediately.  The Senate yesterday approved the measure by a 35 – 4 vote along party lines, sending the bill to the Governor for his signature.