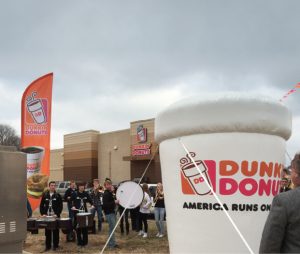 When you’ve spent most of your professional career in the roller coaster world of theme parks, becoming a Dunkin’ Donuts franchise operator hardly seems like the next logical step. But for Cory Roebuck – who toiled for 17 years managing amusement parks and attractions up and down the coast of California before ending up in Branson, Missouri – the decision to open his own Dunkin’ Donuts restaurant was one that was driven by an entrepreneurial spirit, but rooted in practicality.

“I’m an entrepreneur at heart, and I love making money, but it wasn’t until later in my career and life when I thought to myself, ‘I make money for other people. Could I perhaps start my own business and be an entrepreneur?’” Roebuck says. “It tugged on my heart for a while, and after I talked it over with my wife Katie I thought, I’m forty years old and I’m either going to have to do this now or convince myself that I’m going to spend the rest of my career at theme parks. It had been a great career, and it was great fun actually, but we made the decision to go out on our own and start our own business.”

The next decision was whether to join a franchise system, or go it alone. With a wife and family (three small children) to take care of, Roebuck decided he didn’t want to take a chance on starting a new enterprise from scratch because of the potentially long time period before the business would become viable, if at all. “So we decided to franchise. A franchise comes with a proven formula, and therefore there’s less risk of failure,” he says. 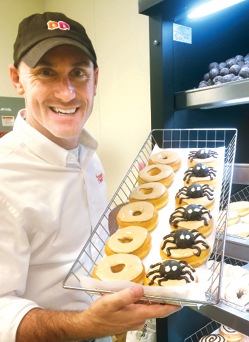 The next task was to find the right system. During their research, he and Katie were amazed at the number of different franchise opportunities, many of which they had never heard of. Katie came across an article on the internet entitled, “Top Twenty Franchises to Own,” and as they went through that list, every one of them was represented in the Springfield area, except Dunkin’ Donuts; Springfield is the state’s third largest city.

“You could have hit me in the head with a two-by-four. It was like, ‘Wow! Why not Dunkin?’” said Roebuck. “We loved the fact that it’s all about the coffee now, and that it’s highly repeatable. A franchise had already been in the area (in nearby Branson, which only operated during tourist season and closed in 2011), so there was great brand recognition and brand loyalty and a following here, so we went with Dunkin’.”

Once he decided to become a franchisee, Roebuck and his father Toby decided to team up. Dunkin’ was looking for an operator to open four locations in the Springfield market by 2019. Father and son drove three hours to a newly-opened Dunkin’ location in Columbia, Missouri and made their presentation to brand executives.

“And as my father and I drove home, we were asking one another, ‘Hey, is this really what we want to do, is this the right thing?’” Roebuck recalls.

Among their chief concerns was real estate. Both Roebuck and his father are local real estate brokers so they were aware that good locations in Springfield were hard to come by. As they drove back from Columbia that day, Roebuck says, fate intervened.

“We said a prayer, and a minute after that, we got a call from the Springfield real estate broker, who told us that another brand (that had a restaurant building under agreement) just backed out and it became available.”

That, he says, was the sign they needed to move forward with the deal. Roebuck created Ozark Donuts, LLC and inked an agreement to open three Dunkin’ Donuts restaurants in Springfield and one in Branson.

Their inaugural store would open in December 2015—just in time for Christmas. As Roebuck recalls, the months leading up to the opening were hectic, to say the least. 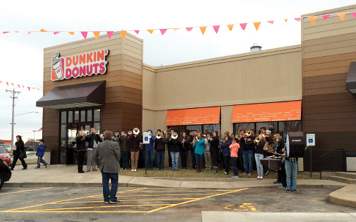 Roebuck went to work converting the former Backyard Burgers location on S. Campbell Avenue in Springfield into a Dunkin’ Donuts. While the construction was underway, he got busy with his Dunkin’ training, spending four weeks at Dunkin’ Donuts University, and two weeks behind the counter at a shop in Schererville, Indiana. At the same time, he was busy overseeing the renovation and equipment purchases.

“It was a [hectic] time in my life, because we were the only store in the area and it was difficult for us to hire and do training for our store leadership,” Roebuck recalls. He and his team returned to the Columbia restaurant where Roebuck made his initial pitch to run a Dunkin’, for two weeks of intensive training.

It didn’t get any easier when they returned to Springfield to prepare for their pre-Christmas opening. “Unfortunately, the construction was still going on at the store, and it was a hard hat area, so the employees had to wear hard hats during training,” laughs Roebuck.

At 5:00 a.m. on December 21, 2015, Roebuck opened the doors. The team looked at it as a “soft opening,” with little fanfare, but the word got out on social media. By afternoon there was a line out the door. “By the time we closed, I literally had to stand in the street and stop cars from pulling into the parking lot at 10 o’clock at night,” says Roebuck.

He did not anticipate that immediate level of enthusiasm, and stayed on with the bakers all through the night, making donuts. “The next thing you know I’m still there and we’re opening the store on the second day, and I realized I had been up for 40-plus straight hours,” he says. “I went home and took a shower, changed my clothes and got some sleep. It was a tough opening for me and my leadership staff as well. We pulled long hours those first couple of weeks just to accommodate our guests.”

Roebuck says the long hours continued for the first couple of months, until things settled down and his operations normalized. By then, it was time to get the process started for his next location, this one in nearby Branson, a popular vacation destination about 45 miles from Springfield.

“With the tourist market there, we’re waiting a little bit before we open that one.”

Roebuck already has a building under contract and is planning to begin construction this coming winter with a scheduled spring 2017 opening.

Roebuck has also realized that a drive-thru would be a boon for business. His development deal calls for standalone – or endcap – locations only but he says he’s looking at whether he can add a drive-thru to his present location. He’s also considering other options having fielded inquiries from local gas stations about putting a Dunkin’ into their C-stores.

With the first store, Roebuck decided to incorporate sustainable practices into the construction process, and he says the decision to “go green” was twofold. “First, we think about the bigger picture and the impact we’re having on the environment, and it just feels like the right thing to do,” he asserts. “The other piece of it is that from a financial standpoint, it makes absolute sense as well.”

“Those are things that give us payback over time,” Roebuck says. “We won’t see that return in the first year, but in the next few years we’ll see a return on that investment.” As a result of his efforts, the Springfield, Missouri restaurant is the first in the Midwest to receive the DD Green certification for sustainable and energy-efficient renovation of the building.

Roebuck also wants people to know that his faith plays an important role in the way he operates his business. “One of the things that’s unique with us, is that I wanted a business that was openly Christian,” says Roebuck. “I’m obviously not going to be proselytizing to customers as they come in, but I just want them to know that it’s important for me that my faith is evident in how we deal with our employees and customers. Our mission statement is actually to honor God by positively impacting the lives of everyone that comes into Dunkin’ and those around us.”

Roebuck tries to practice those principles beginning with the way he treats his employees. He offers incentive programs such as 10 cent per month raises and movie tickets for employees who meet personal goals (such as attendance and positive guest surveys) and says these incentives have paid immediate dividends.

“We’ve done a great job of creating a culture where I think our employees feel appreciated. We have not had to hire a single employee since we opened, and we’ve retained just about every single one of our managers. I look at it this way: How much do I pay someone else to come in and train someone to start a new position when I lose my hourly employee? If I can do anything to retain them I’m probably better off.”

Those principles also extend to support for local charitable efforts, such as the Greene County 100 Club, a not-for-profit organization that provides financial support to the surviving spouse and dependent children of police officers and firefighters killed in the line of duty in Greene County. Roebuck, himself, is a volunteer firefighter and recalls a harrowing experience he had on the job.

“I was responding as a firefighter to a flash flood, and the boat that I was in flipped, and I got trapped. I was holding onto a tree in the rushing water in the middle of the night and I thought I was going to die, and all I could think about was my family.”

Roebuck survived the ordeal, and when he was approached by Greene County 100, “that was the first thing that came to my mind. We need to make sure we’re supporting the families of fallen firefighters and police officers.” At the grand opening in January, Roebuck presented the charity with a $1,000 check. He further supports first responders by offering firefighters, police officers, and paramedics a 50 percent discount. He also helps the police improve community relations by offering his store for the Springfield Police Department’s “Coffee with a Cop” program.

So how have his theme park experiences helped him in his Dunkin’ career?

“What I love about operating a Dunkin’, is that it is very much the same philosophy,” Roebuck says. “When you go inside a theme park, we want you to forget your everyday life and become engrossed in that experience. When you walk into Dunkin’ it’s also about that experience. When you come in, hopefully our employees recognize you and say hello, and it’s a great environment and atmosphere. You can make their day a little better.”