By Michael HobanPublished May 1, 2018Category Features 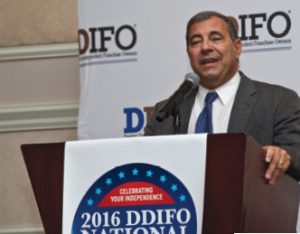 When Keith Miller, the outgoing Chairman of the Coalition of Franchisee Associations (CFA), posted his farewell address on the franchisee website Blue Mau Mau, he welcomed his successor by stating that he looked forward to “working with new Chairman, John Motta, to elevate the CFA during his term.”

“CFA is a good organization, but it needs to be a great organization,” Motta told Independent Joe during a recent interview. “We meet twice a year, we go to Washington, we talk to our representatives, but I don’t think we make the impact that we are capable of. I believe that the CFA is a sleeping giant, and that it can be woken up.”

The CFA represents more than 41,000 franchisees who own over 86,000 businesses that employ over 1.4 million people. It is the largest franchisee-only association in the country, but Motta feels the organization needs to be pushed to reach its full potential. “When I tell people about the CFA and who we represent, they listen. But I don’t think we’ve taken it to the level we can. The more influence that the CFA can have, the better it is for all franchisees,” he asserts.

Motta is no stranger to taking charge, a skill which should be invaluable in elevating the profile of the organization. He’s demonstrated his ability to lead as a board member with the CFA, as well as a member of the Dunkin’ Brand Advisory Council and co-chairman of the Development Subcommittee. He is also president of the United States Adult Soccer Association (USASA), a national organization for amateur soccer which boasts over 250,000 adult members within its leagues and teams. 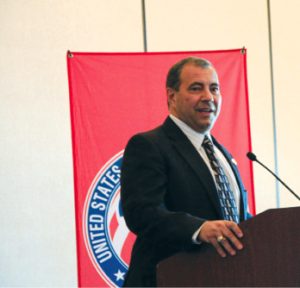 At the time of interview, Motta had been on the job for barely a month, but his experience with the organization had already shaped his early priorities. His first action will be to “reevaluate the role of the CFA on the whole,” beginning with determining how its various committees can be more effective. He is now soliciting input among the membership to more clearly define the goals of the individual committees, and the roles of the committee members. And he says he would also like to see committees provide more comprehensive reporting on their progress achieving established goals at all the board meetings.

That is something which has not been done consistently in the past, and Motta concedes he himself is guilty of having once belonged to a committee and given less than his full effort. “We rarely met or did anything, and even though I know I’ve been at fault myself, as chairman, I want to change the way we do things.”

A second priority will be to increase the social media presence of the CFA via their Facebook page and Twitter feed. And while he recognizes that doing so involves a lot of hard work for both he and CFA Executive Director Misty Chally, he also knows that it pays dividends. “We really need to get more information out via those social media outlets, because in today’s world, that’s where all the power is – on social media.”

Motta knows that for a social media strategy to be successful it has to be active. That means generating more content. Motta feels that can be achieved in part by publishing the CFA’s stances on legislative proposals that impact franchisees, as well as reacting more swiftly when a measure is passed or defeated. He cited the recent passage in the House of the ADA Education and Reform Act of 2017 – which protects franchisees from fraudulent, drive-by lawsuits – as an example.

“We were very strong on that, and had made it one of our priorities. And when it passed the House, we should have been on the forefront by having a position paper ready to go to move it through the Senate,” he says. “I don’t think we’ve taken the lead on a lot of these things in the past, and that’s something I’d like to [change].”

Another priority will be to strengthen the influence of the organization, by both boosting membership and increasing the level of participation by its members. He cited the annual CFA Day Forum held in Washington D.C. as an event where franchisee participation could make a significant impact. CFA Day, which will be held on May 9, 2018, brings franchisees together to learn about pressing legislative issues from subject matter experts. After the briefings, franchisees attend a reception where they meet with members of Congress to advocate for their issues.

But Motta says it’s been difficult to get franchisees to attend, and believes strongly that the effort would be more impactful if 500 franchisees were on hand for CFA Day. The event typically draws one-tenth that number. 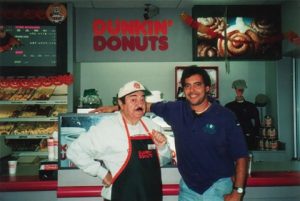 “CFA can go to Washington to meet with legislators all day long, but if one of their voters shows up, and they speak to their Congressperson one-on-one, they can have a lot more impact,” Motta explains. “And it can’t be just the same few of us going in to fight for the franchisees. We’ve done well, but we need participation from a lot more franchisees.”

In addition to the internal issues he will be addressing, Motta says there are a number of challenges that all franchisees face, chief among them a tightening labor market affected by lower unemployment and stricter immigration laws. “It’s the number one issue that I hear from all Dunkin’ Donuts franchisees as well as other franchises,” he affirms. “There’s just no-one to hire.”

He and Rob Branca, who chairs the BAC’s Government Affairs Committee and was a former CFA vice chairman, recently traveled to Washington D.C. to meet with Secretary of Labor Alexander Acosta. According to Motta, the secretary acknowledged that a lack of workers is one of the most pressing issues of the day.

Any solution would have to involve immigration reform, says Motta, and the CFA is strongly advocating for the expansion of the J-1 visa program. “I know when they talk about the visa program, they want highly skilled workers, but I think we need workers from both ends of the spectrum. We need doctors and engineers but we also need people to work in restaurants and to clean hotels and to do farm work.”

Motta also says that passage of the CFA’s “Universal Franchisee Bill of Rights” (designed to create balance between franchisees and franchisors) is still “very much on the front burner.” A CFA committee is working towards its passage. While there are some federal bills being considered, they haven’t gained any real momentum. “We’d like to see something happen at the federal level, but we feel that if we could get a few key states like California and Florida to pass it, then it would be easier to pass nationally,” Motta says.

“We’re very excited to have John as the new chair. He’s been very active with the CFA for years, he attends every board meeting and he always has a fresh perspective on things,” says Chally, the association’s executive director. “He’s really focused on making CFA better in every way.”