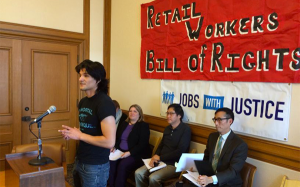 There was more municipal government action elsewhere on the west coast this week detrimental to small business interests as the San Francisco Board of Supervisors unanimously gave its approval to the so-called Retail Workers Bill of Rights, a package of legislation that will dramatically alter retail employee scheduling rules and other facets of the employer-employee relationship in the City by the Bay.  In light of the vote, it is anticipated that the entire package will be formally passed and signed into law within the next few weeks.  One provision requires any retail chain with 20 or more locations worldwide employing 20 or more people within the city to provide 2 weeks advance notice of any change in a worker’s schedule!  An employer that violates the ordinance will be required to provide additional “predictability pay”!  Believe it or not, a California Congressman also filed similar legislation in the US House of Representatives (H. 5159).  Congressman George Miller (CA – 11th district), has filed a federal version of the Retail Workers Bill of Rights that he calls the Schedules That Work Act.  Fortunately, Congressman Miller retires at the end of next month and his bill won’t move through the GOP controlled House.  There must be something in the water . . .  Whether there is or not though, expect to see these kinds of intrusive proposals cropping up elsewhere around the country.  Ìn government circles, you can’t keep a bad idea down.