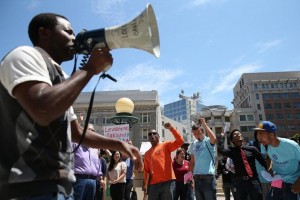 Aside from statewide initiatives, efforts, mainly in California, to mandate wage increases at the local level passed in most cities where they were considered as well.  Eureka, California was the exception that proves the rule as its voters rejected a measure that would have increased the minimum wage within the Humboldt County City to $12/hour.  Elsewhere however, all minimum wage proposals met a much more favorable fate – Oakland, California approved a ballot measure that increases the minimum to $10.25/hour and requires employers (with fewer than 10 employees) to offer at least 5 paid sick days to all employees.  Larger businesses (10 or more employees) will be required to provide nine days of paid sick leave per year, effective March 2, 2015.  Aside from the Oakland ordinance, San Francisco voters approved an increased minimum in the City by the Bay of $15/hour by July, 2018.  Proposition J, pushed by Mayor Edward Lee, requires an increase to $12.25 by May 1, 2015, then $13 by July 2016 and an additional $1/hour in July, 2017 and then July, 2018.  Over the past few months, several other cities in California and elsewhere, including Berkeley, Richmond, San Jose and San Diego, along with Las Cruces, NM, among others all increased the minimum wage for workers within their city limits.  Furthermore, there were a host of initiatives in Wisconsin seeking guidance on increasing the minimum wage put before the voters – they include the cities of Appleton, Menasha, and Neenah, as well as the counties of Dane, Eau Claire, Kenosha and Milwaukee, each of which passed advisory questions increasing the minimum wage to $10.10/hour.