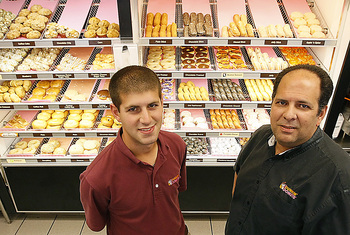 Rick Carvalho, left, and his father, Joe at Dunkin Donuts on Main Street Tuesday, October 18, 2011. The business has been in their family for more than two dozen years.

Joseph Cote of the Nashua Telegram reports on October 19th that the city will be at the center of a milestone in the state’s history Wednesday: the 50th anniversary of the opening of New Hampshire’s first Dunkin’ Donuts.

A celebration will be Wednesday morning at the chain’s newly refurbished store at 42 Main St. from 10:30-11:30. Mayor Donnalee Lozeau will be on hand for the event along with members of the Carvalho family of Hollis, who have been in the Dunkin’ Donuts business for more than 30 years.

“There are now more than 200 stores in the state, and we’ll celebrating the past, the present and future of Dunkin’ Donuts,” Rick Carvalho said Tuesday.

The family moved to New England from Portugal in 1966 and opened its first franchise in 1978. The family now owns the first store built in Nashua.

Robert Stebbins spent a lot of time hanging around the intersection of Main and Canal streets before the coffee shop opened in 1961. He still does and orders a medium coffee with four Sweet’N Lows a couple of times a day.

“I remember buying coffee here when it first opened,” Stebbins said. “I think it was 15 cents.”

Stebbins said when he first moved to Nashua, he hung around at a bus stop and newsstand with a pinball machine nearby and watched the trains turn around behind where the Dunkin’ Donuts building now stands.

A lot has changed in the past five decades, but the store still occupies a prime spot for a coffee shop on one of the main thoroughfares to Hudson.