It’s been called “The World’s Playground,” “Queen of the Resorts,” “Boardwalk Empire,” and “Monopoly City.” Atlantic City, the iconic seaside resort and undisputed gaming capital of the east coast, is world famous for its magnificent boardwalk, glitzy casinos and storied entertainers that headline this national showplace. But “AC” is indeed “Always Turned On” in other ways – more than $1.7 billion in investments in recent years has lured over 30 million visitors a year to attractions that range from championship golf, luxurious spas, fine cuisine, and trendy shopping outlets.

It is apropos that Atlantic City is the location for the first DDIFO (Dunkin’ Donuts Independent Franchise Owners) meeting held outside of New England on Sept. 16-18. Although the region has largely bounced back after last year’s devastating Hurricane Sandy, the business community continues to recover from both nature’s blow as well as a slow economic climate and increasing market competition. Atlantic City’s current mantra is “Stronger Than the Storm,” an echo of, “Boston Strong;” both cities share a determination to overcome adversity with an invincible spirit of unity. From Atlantic City to Morris Plains and Wallington, Dunkin’ Donuts also has a large presence in New Jersey.

The 2013 National Conference and Hall of Fame Awards Gala is shaping up as DDIFO’s best ever as the independent association of Dunkin’ Donuts franchise owners meets to explore business issues and examine relevant regulatory and legal trends. Franchisees will be buzzing about higher payroll taxes, soda bans, and paid sick leave. “Conferences are vital to establishing networks with fellow franchisees not only from a brand perspective but also a state and regional context,” said Anthony D’Amore, a New Jersey franchise owner who has 16 stores across the state’s Union and Middlesex Counties. “Making connections and getting informed is also the path to lowering prices and understanding profitability.”

DDIFO is honored to have New Jersey Lt. Governor Kim Guadagno as this year’s keynote speaker. A prosecutor by training, Guadagno has developed a keen sense for New Jersey business. She leads the New Jersey Partnership for Action, a collaborative effort among four independent agencies: the New Jersey Business Action Center, New Jersey Economic Development Authority, and Choose New Jersey. Recently she kicked off a pro-tourism campaign called, “Show Your Love for the Jersey Shore” just in time for the DDIFO National Conference.

Earlier this year, Lt. Governor Guadagno made the historic announcement that the Miss America Pageant would return to Atlantic City this September.

“New Jersey is proud to once again host the Miss America Pageant here in Atlantic City. We are confident that Atlantic City’s famous boardwalk and variety of restaurants, shops and entertainment venues will showcase the city’s vibrancy and attraction to the participants and many visitors that will attend the Miss America Pageant every year.” (Preliminary competitions for the 2013 Pageant are September 10, 11 and 12; the finals are being held Sunday September 15).

Franchise owners who have attended previous National Conferences can tell you they receive great insight from in-depth talks like those from DDIFO Restaurant Analyst John Gordon. At last year’s conference, Gordon addressed Dunkin’s strategy for westward expansion and answered questions like, “Whether franchisees in new markets get to unit profitability fast enough to allow them to continue to expand and fulfill their development commitments?” and “What are best practices in new restaurant development?”

DDIFO National Conference is:
“Challenging each other not to be complacent and consistently striving to get better at what we already do well is most important”
— Steve Gabellieri, a four-unit Dunkin’ Donuts franchise owner

This year, that important theme as well as regulatory and tax related issues will also come under discussion. “I have learned so much about the implications of the Affordable Care Act, changes in various labor laws and how I can be impacted by Dunkin’ Brands being a publicly traded company through the consultants and industry experts that the DDIFO engages to speak at the national conference,” said Steve Gabellieri, a four-unit Dunkin’ Donuts franchise owner in Rhode Island.

The Obama administration has delayed the employer mandate but the Affordable Care Act continues to march closer to complete implementation. As various provisions are implemented, franchise owners continue to access and prepare for compliance. Alex Rowzani, franchisee owner of four Dunkin’ Donuts Restaurants in Jamaica, N.Y., said that he learned much about Obamacare at last year’s national sessions. “There were many questions running through my head before I attended the conference, including ‘How is Obamacare going to affect my four businesses?’ and, ‘What is going to be the bottom-line once the year closes?’ and, ‘Does Dunkin’ have a solution or a general answer to this pandemic?’ My various questions were answered throughout the presentation.” 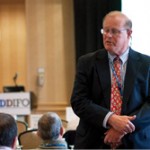 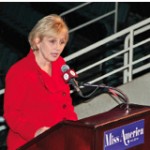 New National DCP Chief Executive Scott Carter will address the attendees after lunch on Tuesday September 17 on the topic of, “Next steps from here.” In a recent interview with Independent Joe, Carter discussed the declining cost of goods (COGS) and how that is already saving franchisees money. (Read our interview with Scott Carter).

By holding the 2013 National Conference in New Jersey, Shanahan says he is hoping franchisees recognize the organization’s effort to focus the conference on issues that impact all regions. This year, DDIFO is unveiling a new panel discussion called, “Conversation with Dunkin’ Franchisee Stars!” which Shanahan believes will be one of the most talked-about events at the 2013 National Conference.

“I think it will be beneficial for long-time franchisees with a large network as well as newcomers to the system who are looking to expand their own business footprint,” said Shanahan.

DDIFO National Conference is:
“Beneficial for long-time franchises with a large network as well as newcomers to the system who are looking to expand their own business footprint”
— Ed Shanahan, DDIFO Executive Director

Franchise owner Rob Branca will serve as moderator. He anticipates panelists sharing their unique perspective on the state of the business and navigating difficulties. “I’m looking forward to hearing from some of our most successful and dynamic franchisees from all different regions. I, for one, hope to gain valuable insights from these colleagues.”

Gabellieri also enjoys comparing notes with other franchise owners at the Conference. “Challenging each other not to be complacent and consistently striving to get better at what we already do well is most important,” he said.

Rowzani, the New York franchise owner who earned two awards for greatest growth in guest visits during his first year, agrees, saying he always enjoys asking others how they first got started in the industry. “I love listening to their stories and I love hearing what inspired them to stick with the brand. By listening to their stories I learn what struggles they went through and how they succeeded.”

For many the highlight of the annual National Conference is the DDIFO Hall of Fame Awards and Recognition Dinner. Franchisees call it, “an inspirational and informative event that celebrates pioneers and visionaries who have helped establish the brand into the leading franchise it is today.”

“Helping franchisees achieve their individual goals by collectively bringing everyone together is what DDIFO is all about, and this conference helps achieve that purpose,” said D’Amore.

Storm surges from Hurricane Sandy flooded 85 percent of Atlantic City. The storm destroyed a 50-foot section of the city’s iconic Boardwalk in the South Inlet, which had been slated for reconstruction. Photos Credits: Top www.achotelexperts.com, Center & Bottom Governor’s Office/Tim Larsen

Listening to the latest products and services offered by DDIFO’s sponsors is also a vital part of the conference. This year, there will be many familiar faces displaying their companies’ products and discussing benefits of their services, and there will be new sponsors as well. According to Shanahan, more exhibitor booths have been ordered for this National Conference than ever before.

One thing that will definitely be different at this year’s National Conference is the presence of the Atlantic City boardwalk. An iconic and historic place, the 2013 boardwalk features a vibrant dining scene from famous names like Wolfgang Puck and Bobby Flay. It also features popular casino buffets, ethnic cuisine and the traditional boardwalk grab-and-go fare of hot dogs, pizza and pretzels.

And, at the center of the boardwalk sits Caesars Atlantic City Hotel and Casino. The host hotel for the DDIFO National Conference is one of the largest in the city, and includes a luxury hotel, spa, shopping center, and of course, casino.

Rhode Island franchisee Steve Gabellieri, whose father, Ralph, was inducted into the Hall of Fame two years ago in a tribute to some of the early franchise owners, is looking forward to another DDIFO conference. “It is very rewarding to see the success of Dunkin’ Donuts franchisees. I am proud to be associated with such an elite group of business people,” said Gabellieri. “The DDIFO National Conference provides a format where you can have candid discussions about business issues that are outside the scope of the brand’s support system. You really walk away feeling that you learned something that has tangible value and can be applied to your business to make a real difference.”