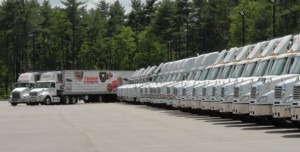 The United States Postal Service has always been known for making deliveries no matter the weather. In recent years, Fed-Ex and UPS made seven-day-a-week deliveries commonplace. Now, the National DCP wants to transform the delivery system that serves Dunkin’ Donuts franchise owners into a 24/7 operation. The program, called route optimization, is one of two initiatives the National DCP is rolling out in 2014. The other – known as network optimization – will reduce costs and improve service. The combination, according to Scott Carter, chief executive of the National DCP, will fulfill the promises made when the National DCP was created in 2012.

Even as Dunkin’ Donuts has added shops in its core markets and expanded into new territories, the DCP has not altered the way it makes deliveries. While supply chains serving other restaurant systems expanded to 7-day-a-week deliveries during all day-parts, the DCP had yet to implement an every-day, around-the-clock schedule. Route optimization, Carter says, brings Dunkin’ in line with other food service distributors.

“We are now ready to begin making deliveries at any hour, any day,” says Carter, who noted the DCP won’t make deliveries on Thanksgiving and Christmas. “And, we are prepared to make deliveries with or without the assistance of an employee. Stores can take deliveries during the hours they are closed overnight as long as the site has been prepped.”

Charles Cutler, a franchisee with a nine-store network around Fort Lauderdale, says the Florida market has been testing overnight deliveries for about 18-months.

“Most of my managers were nervous about the idea of having deliveries overnight, but they actually like it. It’s easier on everyone when deliveries come overnight, especially at shops that are open 24-hours,” Cutler says. 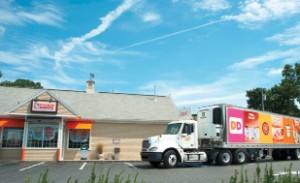 And, if a shop is closed when the DCP truck rolls in, the driver can access a key through a lock-box, the code for which is known only to the DCP. Once inside, the driver can stack boxes on shelf space that’s been left clear as well as in freezers where space has been cleared. According to Cutler, when the program first started, stores were given a four-to-five hour delivery window, but that’s changed to a guaranteed one-to-two hour window.

John Justo, former DCP board chair, says Florida was used as a test market to identify how route optimization would impact franchisees—from both an operations and cost perspective. He credits the franchisee leadership in Florida for their willingness to try it out and help identify rough spots that had to be smoothed out before such a change could go national.

“The organization is grateful to them for letting us pilot the test in Florida. The test uncovered a number of concerns in concert with some process issues. The NDCP leadership has utilized this learning, adjusted its process, and is better prepared to manage the next phase of the roll-out,” says Justo.

Carter says the Florida experience demonstrates that route optimization will shorten the delivery time and make the National DCP more efficient. “This was an issue we needed to address and it’s a solution that works for everyone.”

According to Cutler, “We had some hiccups during the first couple of weeks, just like with any launch, but there are no issues now.”

Route optimization enables the National DCP to operate more efficiently—controlling cost while enhancing service. “The merger gave us the opportunity to address this kind of improvement,” Carter says.

As Dunkin’s domestic growth has increased, so has the number of miles DCP trucks are driving, according to Carter. “Since 2010, the number of stores opening beyond 200 miles of an existing distribution center has increased 60 percent,” Carter says. “Our business has not kept up.”

In fact, according to Justo, the merger review illustrated that, outside of opening a few new facilities, the regional DCP distribution approach hadn’t changed all that much over the past several decades, even as Dunkin’ had expanded its menu and its number of domestic locations. Creating a new DCP model, says Justo, is equally important for both existing as well as emerging markets.

“New development is not the only driver of these proposed initiatives. Route and facility optimization are important to appropriately service all our existing members as well,” Justo says.

In order to meet the growing demand – and additional miles – Carter and the National DCP board closely examined this question: Where are our buildings and are they in the right place, relative to cost to service and levels of service we need to provide? The answer led to the National DCP’s new network optimization plan.

“We are going to go from seven distribution centers (DCs) to 13 in the next three to five years. The average size of these new DCs will be 125,000 square feet,” compared to Bellingham and Westhampton which are approximately 300,000 square feet, Carter says. “If the most expensive cost is transportation, it’s logical to shrink a DCs size and shorten the route miles. This will optimize inbound supply with outbound delivery.”

As network optimization rolls out, franchisees will receive deliveries from a new DC. Carter says the transition should be seamless for franchisees even as they begin to notice the cost savings.
And, as new markets increase density, the new DCs will be better positioned to meet the demands without increasing franchisee costs.

Still, this change will not come overnight. “Network optimization could take five years to fully implement,” according to Carter. 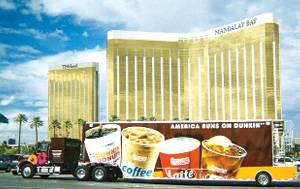 Creating a larger network of smaller distribution centers offers another important benefit, Carter says. If, for example, a major weather event or power outage interrupts service at one site, the National DCP will be better positioned to support that impacted region. Carter likes to use the example of Hurricane Sandy. If that super-storm had knocked the Westhampton facility off-line, deliveries to 2,400 Dunkin’ Donuts shops in the Mid-Atlantic region would have stopped.

“Currently, we would have trouble absorbing 2,400 stores if there was a disaster,” says Carter. “Having more small facilities rather than fewer large facilities will help us provide continuity.”

The locations and opening dates of the National DCP’s six new distribution centers are not finalized yet, but Carter says they will absolutely have a cost and service benefit to the franchisee community. Coupled with the new route optimization plan, the National DCP will more closely resemble other major food distribution systems—if not the U.S. Postal Service or Fed-Ex.

It’s what franchisees expected when they voted to approve the merger. “The reason why we merged was to come up with cheapest price and best service at the back door. This will save us some money and that’s what we all want,” says Charles Cutler in Florida.