The new DCP 65,000-square-foot distribution center opened in Phoenix in October and now provides food, paper and equipment supplies to more than 100 Dunkin’ Donuts restaurants in the southwestern states, according to Kevin Bruce, CEO of National DCP. The Phoenix center is the first located west of the Mississippi and the seventh warehouse in the National DCP (NDCP) network.

Until this past fall, the southwestern restaurants had been serviced out of Mokena, Ill.

“I’ve never seen that in my experience,” Bruce said of the vast western territory and network of franchises serviced from Mokena. “And it was expensive.”

Dunkin’ Brands (DBI) is dedicated to expanding westward and the new Phoenix facility is a vital step to servicing this expansion. In January, 2012, NDCP and DBI signed a longterm, performance-based agreement for NDCP to be the exclusive supply chain provider for all Dunkin’ Donuts restaurants in the continental United States. The agreement backs the brand’s desires to expand into new markets as well as offer the same product costs to western franchisees as in the more established Dunkin’ Donuts markets on the East Coast and Midwest.

In a press release announcing the Southern California expansion, Dunkin’ Brands CEO Nigel Travis said, “Expansion to California has always been part of our plan to grow Dunkin’ Donuts’ presence in the U.S. We have maintained our disciplined approach to expand steadily while focusing on initiatives to improve restaurant economics and franchiinclude our recent agreement with our franchisee-owned and operated distribution and procurement facility, which ensures the same cost of goods to franchisees in both established and new markets by 2015.”

291 new Dunkin’ locations opened in the U.S. in 2012. The ultimate goal is to have more than 15,000 Dunkin’ Donuts restaurants nationwide, and new distribution outlets will work to lower prices, Bruce explained.
“The idea of the Phoenix center was to be in a position to support where the brand wanted to go, which was the western seven,” Bruce said. The Phoenix DCP distribution center is now servicing Texas, New Mexico, Colorado, Nevada, Arizona and Camp Pendleton in Southern California with future plans to include Utah and California restaurants from Los Angeles to the Bay Area. Bruce says expansion in the northwest would likely require another facility. 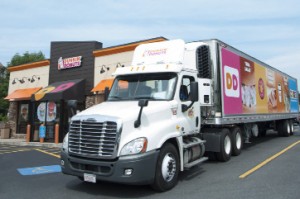 The upside of the Phoenix facility — offering freezer, cooler, dry space and office — is the closer proximity to southwestern stores, Bruce said. “And we’re able to respond more quickly.”

Currently, Phoneix offers 800 stockkeeping units (SKU) to Chicago’s 2500 SKUs, which means inventory is limited. Bruce insists many of these items are parts and equipment and “slower-moving items.”

“We’re still adjusting,” Bruce said. “More items are available. We had some difficulty at first. Some stores came online and carried items we didn’t have.”

Jordan Eads, Dunkin’ Donuts district manager in Colorado Springs, has nothing but praise for the price points, delivery and customer service at the Phoenix DCP—and for Scott Besnyi, the facility’s operations manager— but expressed early concerns regarding the quantity of items available.

“Scott bends over backwards on the back end,” Eads said. “The customer service is great, everything else is fine, but the quantity is an issue.” National DCP Chief Operating Officer Kevin Mellifont agrees the quantity of products was limited when the Phoenix facility first opened. “We did have start up issues that hampered ability to reach our normally high level of service right away. But, Scott has done a great job of taking on those challenges and solving the issues,” he said. Dunkin’ Donuts’ western expansion will mean greater density in still undeveloped areas—like Texas, California, Colorado, Wisconsin and Nebraska. As more stores open in the West, this “density” will help to improve inventory issues, as well as price points, Bruce said.

“We welcome western expansion,” he said, “the sooner the better. We’re constantly balancing that out. Cost will go down with new density. And anytime costs are reduced, everyone benefits.”

Bruce calls the Phoenix and Mokena distribution centers “a classic hub and spoke facility.” The challenge right now is to find the right mix of product and ways to make deliveries more efficient while getting product to stores within their time frame, he said.

Mellifont points out that some vendors have not started delivering products directly to Phoenix so those products have to be shuttled from Mokina. With the assistance of Regina Troglia, Dunkin’s district manager for Phoenix restaurants, and her managers, deliveries are checked and any shortages are immediately communicated to Besnyi and his team so product can get to the restaurants.

“It’s getting better slowly.” Bruce insists that in time, with growth and expansion, the process will improve. “We’re in this for the long haul, pun intended,” Bruce said.