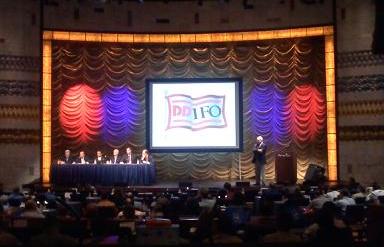 “United Now … More than Ever”, the overriding theme to DDIFO’s first National Members Meeting, is more than a simple turn of phrase: It is a manifestation of the organization’s progress as well as a call to action. And it reverberated throughout the Cabaret Theater at Mohegan Sun on September 21.

“DDIFO exists to serve you. This is your association, not mine,” emphasized DDIFO President Jim Coen in his opening remarks. “This organization’s sole purpose is to make sure that your businesses continue to thrive and grow, to ensure there’s a future to your legacy as Dunkin’ Donuts franchise owners.”

DDIFO is the collective and independent voice of franchise owners representing the owners’ best interests and common concerns. It aims to restore balance—a mutually beneficial relationship between the franchisor and the franchisees—which is especially relevant during ongoing negotiations for a new franchise agreement, a new DCP agreement and the impending sale of the Brand.

With continued growth in New England and Florida, along with the recent additions of Local Member Committees from the Mid-West and Mid-Atlantic, DDIFO has increased membership more than 40 percent in the last year alone. Such growth is vital to raising the organization to a level of national importance, to creating one voice that speaks loudly and boldly on the behalf of all franchise owners.

Bill Mulholland, a relatively new franchise owner in Haledon, New Jersey and a new DDIFO member expressed why he attended the meeting and why the association is important to him. “It’s a good thing to unite with other franchisees. There’s more power in numbers. The franchisees and the DDIFO coming together really helps you out and gives you a voice. Who’s going to listen to me as one store or a growing network?” said Mulholland. “One good thing about Dunkin’ Donuts is that the franchisees are very open and friendly. They give you the best of what they’re doing and you can really grow off of that.”

DDIFO has made significant strides bringing in members from regions outside New England, and the leadership is focused on continuing that growth. “We are truly more united today than ever before with 45 percent of Dunkin’ Donuts shops as members of DDIFO, but we still have a long way to go,” said Coen.

For franchise owners in the Mid-Atlantic region who have yet to join, Mulholland said, “They’re missing out on what DDIFO can do for them. Uniting with a larger group helps us align and share in all the things the association has to offer. It’s about the power of the collective force, the numbers, the unity and not standing alone trying to fend for yourself.”

Similarly, a franchisee from the Chicago area talked about the importance of DDIFO to the Mid-West market. “We feel more unified now in the DDIFO because the organization opened up its doors to us and physically came out to our market to talk to our franchisees. They explained what the value is, what they’re providing, especially with the franchise agreement, and how things in New England affect the Mid-West and every market,” he said. “A lot of franchisees initially joined our local association (the Mid-West Dunkin’ Donuts Franchisee Association [MWDDFA]) because of fear—fear that the Brand wasn’t hearing them, but now many of them feel that fear is gone. They think Nigel’s here, everything is great. But we’re saying that DDIFO is still valuable, that they’re still negotiating a lot of things and when the company goes public or gets sold, that this association has to be strong and have as many members as possible.”

Dennis Gramm is a two-store franchise owner in northwest suburban Chicago. Before buying a shop he worked for the Brand for 11 years, so he has a truly unique perspective. “I’m very, very pleased with the direction of DDIFO. I’m also very familiar with how strong the DDIFO was when I was here in New England as a General Manager for Dunkin’. I experienced first hand the importance of that unified voice,” said Gramm. “As the company has had great success over last 20 years, expanding in the Mid-Atlantic and the Mid-West, that voice has gotten somewhat diluted. I can see over the next couple of years that DDIFO will become a national voice, and it will make a difference. It will ensure the voice of the franchisee is heard inside the room as it relates to both strategic and business planning.”

Despite the prevailing optimism in the air, some New England franchise owners expressed disappointment in the turnout. One New Hampshire franchisee said, “We need to remind our fellow DDIFO members who aren’t here that they should be here. There was plenty of time to plan on this. We’ve known about for three or four months now, so other appointments or meetings could have been rearranged. It has to be important in your mind. Just complaining about DDIFO once in a while and not doing anything isn’t what we need. We need people to be involved.”

A Massachusetts franchisee echoed this, saying, “It’s about strength in numbers. Imagine if this whole room was full. Let’s think about that. Think about the message that would send to corporate.”

Despite those comments, there were many franchise owners who talked about DDIFO’s efforts to advance franchisee interests. “We’ve been DDIFO members since its inception. We felt it was a good thing because it was having somebody behind the scenes,” said another Massachusetts franchise owner. “Sometimes we might think, ‘What are they doing for us?’ But then you come here today and you listen to someone like Carl Lisa (DDIFO General Counsel). It’s tremendous. Here they are helping us to get better terms on our franchise agreement, something that’s really going to play a big part in our future. That’s what it’s all about.”

The meeting program was quite varied and held members’ interest throughout the day. Among the featured elements were: a Q&A panel with Lisa and DDIFO Board members; Gramm’s candid talk about taking pride in being a DDIFO member; franchise attorney Eric Karp speaking about how to be stakeholders –  not spectators –before and during the sale of the Brand; South Carolina franchise owner Perry Ludy addressing how to build profits in a recession; and an open Q&A with BAC co-chair Jim Allen.

There were also sponsor presentations by Doug Falcone of Access to Money and Reeder Burch of Royston Cabinetry and Merchandising, as well as a Business and Tax Implications panel featuring CPA Jim Ventriglia, Jeff Hiatt of Performance Business Solutions and Philip Mann of MS Consultants.

“We had a great response from DDIFO sponsors. With 26 sponsors exhibiting on-site and another 10 supporting the event through program advertisements and goodie bag sponsorships, our sponsorship revenue more than covered the cost of the event,” said Amy Levine, Membership Director for DDIFO.

“I found the whole meeting interesting. It was a good way to put my regular day-to-day life together with the overall picture. You don’t really think of that. You go into your shop. You make sure your equipment is working, your employees showed up. You don’t think of what the big picture is, especially since I’m a small franchisee,” said one Massachusetts franchise owner. “It helped you see what’s behind the scenes, what’s behind your little shops that you’re running and what the driving forces are for the franchisor.”

“I felt the day was very worthwhile and very successful,” said Gramm. “I’m most pleased with and encouraged by the fact that there seems to be a universal understanding now that DDIFO is a national force. I think that message was not only articulated today, but it was continually reinforced.”

Among those in attendance were several individuals whose families have been in the Dunkin’ Donuts business for multiple generations. The theme of continuity throughout the generations was a theme of Coen’s remarks.

“I spoke to a number of franchisees, and one that sticks out in my mind came up from New Jersey. He shared with me that he is a third generation franchisee. Think about it. This young man grew up in the system and has now become a franchisee. His father and grandfather worked and contributed to the brand their entire life. That shows you the commitment that franchisees have. Dunkin’ Donuts is their brand. They built it brick-by-brick for 60 years. They deserve independent representation that enhances, protects and defends their business interests. The collective clout of DDIFO gives them those advantages. As a united organization we have had and will continue to have a substantial effect on the franchisees’ brand equity,” said Coen.