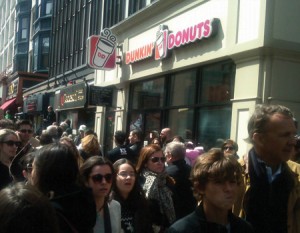 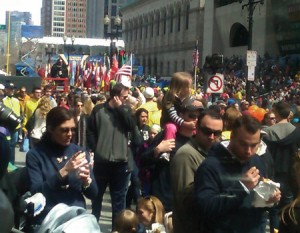 Efharis Alepedis’ shop in Copley Square is steps from the Boston Marathon Finish Line. Crowds begin lining the streets early to get a good view of the historic race.

For Efharis Alepedis, there was no indication that the illustrious 117th running of the Boston Marathon was going to be any different this year for her family’s bustling Copley Square store. It’s the busiest day of the year for the shop, which is just a few hundred feet from the famed blue-and-yellow painted finish line. Nestled in a row of businesses along one of Boston’s most popular streets, the store at 715 Boylston is one of three that the Alepedis family owns; the other two are less than a mile away at the Back Bay train station. Runners, tourists and spectators stream into and out of the entrance, often so crowded that the door never shuts and lines form onto the street. On Marathon Monday, over 1,500 customers are served, with Alepedis typically ordering 90 dozen donuts, and doubling up on other DCP orders.

But this balmy April 15 was oddly quiet with less foot traffic, so much so that Alepedis left to go home, riding her bike back to the South End. It was 2:50 pm, the time that two bombs blasted through the crowd near the finish line, killing three people and injuring hundreds. Unaware of the tragedy and not hearing any explosions, Alepedis rode south down Arlington Street and crossed over Boylston Street without any idea that something was amiss. Then, moments later, she walked in her house and got the first phone call of dozens that would later come. It was from her store manager, who had also left early. “The shift leader called me. There’s a problem; something serious has happened. Turn on the news.”

Back at the shop, it was panicked chaos. “An experienced top crew was working – most knew the marathon day drill, having worked there for a decade or longer. But the team had never experienced anything like this before,” said Alepedis. The windows shook; glass blew out in adjacent buildings, and scared customers came running into the store to get off the street. Outside, the marathon was abruptly halted, and people dropped bags as they fled, knocking down barriers and running in all directions. Bystanders rushed to help the wounded. The shift leader ran to lock the shop doors. Soon after, police arrived at the shop and told the crew to evacuate immediately. Ovens were still going; coffee was still warming. Upon hearing this, Alepedis had a new concern – she was relieved to hear that all were safe and her shop was structurally sound, but now she had a new fear: fire. “I thought, ‘Oh boy, we made it through the blast, but now we could have a fire over there,’” Alepedis said.

Emergency responders talk about a “disaster management cycle” that allows for preparing for an unexpected calamity such as the marathon bombing as well as recovering once a horrible event like this occurs. For Alepedis, after Homeland Security officials allowed her to briefly re-enter the building the next day and to shut-off appliances and throwaway spoiled goods, she and the other Boylston area businesses began a long waiting game that made a swift response difficult. “We had no idea what was happening next. It was frustrating and difficult,” said Alepedis. Her crew kept calling and asking, “When will the store reopen? I told them, I have no idea. We had to take it day-by-day.” 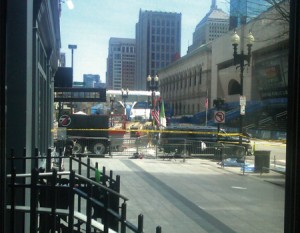 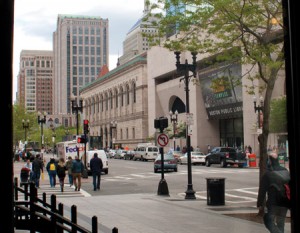 Two photos, taken from outside the Alepedis’ shop, show how the bombings interrupted the normal flow of cars and pedestrians along this busy Boston thoroughfare.

Finally, about four days later, the city of Boston set up a hotline and began sending out bulletins advising businesses on procedures and distributing information on insurance and emergency funding. For Alepedis, she was not just losing thousands of dollars in revenue from the shuttered Copley Street shop – having two other businesses in the impacted area created production and supply glitches. “The CML supplies donuts for all three stores, but the Boylston Street shop was the baking location for muffins, bagels, and other baked goods, so we had to quickly reconfigure our supply distribution,” said Alepedis. “Our goal was to keep the other stores working as much as possible, even though the MBTA [public transit system] closure on Friday affected business for several days.”

A week after the bombing, businesses and residents were allowed to return, but no one knew when Boylston Street would re-open to the public. “Much to my surprise, later that evening we were then told that the street was going to open the very next morning at 3 am,” said Alepedis. “After being shuttered for nine days while law enforcement investigated the terror bombing sites, we had less than 24 hours to get the shop back open.” It was a mad scramble to notify staff, and procure enough products. It was too late to place an order for the donuts, but the CML did what they could do help out, said Alepedis. Although the shop was a little low on supplies, the shop opened for business bright and early at 6 am, supported by a campaign called “Boylston Strong,” which included free parking along Boylston Street and throughout the Back Bay neighborhood.

The street immediately seemed to bounce back. Business and pedestrian traffic began to trickle onto the thoroughfare and MBTA trolleys rumbled to a stop at the Copley Station for the first time since the bombing. “It was busy almost immediately, and that weekend, there seemed to be even more people than there was during the marathon,” said Alepedis.

But there are many lessons learned. Alepedis has met with the insurance brokers to see how much of the more than $30,000 in lost revenue can be covered. She is still working on the numbers and how the financial disaster will affect all three Back Bay stores. She’s also preparing a checklist for emergency procedures and studying what could have been done differently. “Obviously employee safety is number one, and keeping good communication between the franchises, manager and their crew is important.” Appliances need to be turned off; distribution chains need to be ready for last minute supply ordering. 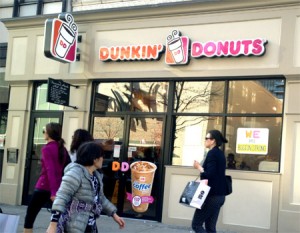 The Alepedis’ shop was closed for nine days after the Boston Marathon bombings, causing a loss of over $30,000 in revenue.

The debris and chaos of the marathon aftermath are gone and the glaring, yellow police tape has disappeared. It’s hard to believe that busy Boylston Street was so devastated just a few weeks ago. “I almost still feel like I’m in a daze, like all of this was a terrible nightmare that I will wake up from,” said Alepedis. She believes that next year, the marathon will be stronger and even more vibrant. “We are going to prepare for the 2014 marathon day to be the busiest ever.” She points to the pink and orange sign that she carefully hand-drew, hanging in the window. It says: “We are Boston Strong.