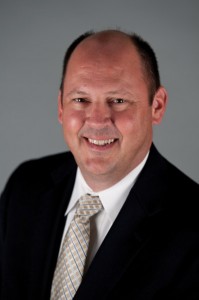 Scott Carter likes to drive. When he was 12 – a time when most kids dream of getting behind the wheel of a race car – Carter was already flying airplanes, following his father’s hobby.

But, Carter never considered a career as an airline pilot; he got into supply chain management instead, taking a job as Logistics Manager in the McDonald’s system, where he learned transportation, warehousing, strategic sourcing and customer service.

Supply chain management, after all, is a place where you literally, and figuratively, drive the business. By the time he was established professionally, Carter didn’t have time to fly planes. So he adapted his aviation skills for nautical – and personal – purposes, owning and operating many types of boats over the years. It’s how he decompresses. Being on the water is Carter’s favorite way to spend time with his wife Nicole and three children ages 12, 9 and 8, who he calls his “number one priority.”

Back in the driver’s seat

When the regional DCP’s entered into negotiations with Dunkin’ Brands to reformulate the franchisee-owned cooperative, Carter came on board as a consultant. He led the team that rewrote how goods would be procured, delivered and priced during his tenure as the organization’s interim CEO. Additionally he led negotiations with Dunkin’ Brands for a new relationship agreement; and conducted face-to-face meetings with franchisees from every region to address their concerns and help ensure a majority of owners would vote to dissolve the regional distribution centers and form one, national distribution and procurement entity.

And when it was over and the historic agreement was executed, Carter was ready to move on. “I was headed to another system and the DCP board contacted me to see if I wanted to talk about joining full-time,” Carter told Independent Joe during a recent interview in his Bellingham, Mass. office. “I felt it was the right fit and the right time for me. So, I’m back and I’m committed to the long term success of the NDCP.”

Focus on the big numbers

Every morning Carter starts his day reviewing the daily service and cost metrics. “I’m really heavily focused on cost of goods. That’s where we drive value,” he said.

Cost of goods, or COGS, represents 90 percent of the NDCP’s costs. Transportation and warehousing make up the other 10 percent. According to Carter, the logistics involved in running a national supply chain to keep up with Dunkin’ Brands’ westward expansion are challenging. Franchisees need products delivered on time, and they don’t care what hurdles have to be jumped over to ensure the boxes arrive. And because it’s a cooperative, any profits earned are distributed back to the members.

“We’re focused on the best possible service levels at the lowest possible price,” said Carter. But, he knows the
number one driver of franchisee profits is cost of goods.

“Three points in COGS reduction is roughly $60 million to the franchisees,” he said. “Real estate, utilities, labor – for the most part – it’s all local market driven and managed tightly at the store level. Managing cost of goods requires national coordination and is the number they [franchisees] can truly impact in a big way by leveraging the cooperative.”

Which is why Carter always saw sourcing as a critically important piece of the relationship agreement with Dunkin’ Brands.

The opportunity in sourcing

A unique component of the NDCP’s landmark 2012 agreement with Dunkin’ Brands gives the co-op the ability to participate in new product development. At the time it was announced, Carter told Independent Joe that by having a seat at the product development table, the supply chain and, therefore, the franchisees would play a greater role in how the ingredients for a product are sourced. During that 2012 interview he said, “Now the NDCP has the ability to apply expertise to find the lowest cost, highest value product to match a Dunkin’ functional spec.”

When we sat in his Bellingham office this summer, Carter emphasized that much of the value franchisees will realize now and in the future comes from sourcing, not operations. That’s why Carter is expanding his sourcing team. By the end of 2014, the NDCP will more than triple the number of full time employees it has working on new product development. “One of these people is a food scientist who will help us really understand the management and cost of raw ingredients.”

The goal, says Carter, is to position the NDCP at the center of the picture when new products are considered. “I want to be the resource to the brand when they say they want that next product, instead of waiting for them to say, ‘here’s the new product.’” That way, he says, value is built into the cost of a new product at the onset – instead of trying to recoup value after the product is on the market.

Accessibility to the marketplace

According to Carter, since 2006, the DCP’s Board of Directors has considered moving the co-op’s administrative offices out of the Bellingham distribution facility. Once the National DCP was created – and Dunkin’ Brands signed more and more development deals in states west of the Mississippi – the board agreed it was time to find a new location.

An outside analysis of potential new sites yielded a list of five for consideration. From there, Carter and his team examined several criteria including the cost of doing business in that particular location, its access to the supplier base, its access to the customer base, and its access to a competitive, supply chain oriented labor pool. Ultimately, the team chose Atlanta as the new home of the NDCP’s administrative offices.

According to the Metro Atlanta Chamber, the region “has grown into a leading global logistics hub and center for supply chain management and technology due to its strong cluster of headquarters that demand efficient services, vital southeast geographic location and robust infrastructure.”

That means there are a lot of experienced, talented supply chain experts working in the area. Carter knew a place like Atlanta has marketplace mobility, meaning good people routinely move from one company to another, sharing knowledge and best practices. And, as Dunkin’ Donuts establishes itself as a national brand, this will provide access to people with experience sourcing and moving supplies across the nation.

Proof of this is his perfect order measurement: how often products are delivered on-time, in¬ full and with a clean invoice. When he took over as CEO in February, perfect orders were delivered, on average, 63 percent of the time. Today, it’s 80 percent – meeting the requirements established in the relationship agreement with Dunkin’ Brands. And, Carter says the improvements came with no increase in operating costs.

But there is another way of knowing how well the National DCP is meeting its customer’s needs: he can always can check the calls that come into member services. Lately, these complaint calls are way down.