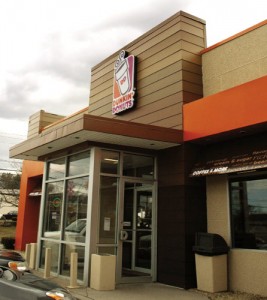 Dunkin’s new design schemes – Original Blend, Cappuccino Blend, Dark Roast and Jazz Brew – are designed to appeal to customers who want to sit and relax while enjoying a cup of coffee and snack.

When franchisee David McNulty opened the newly redesigned Dunkin’ Donuts on busy North Roosevelt Boulevard in Key West, Fla., he wondered how customers would respond to the brand’s updated look and layout. The former KFC location had been completely gutted and replaced with Dunkin’ Donuts’ sophisticated and mellow “Fresh Brew” makeover. Instead of a grab-and-go atmosphere with hard, orange plastic chairs and laminated tables, customers found the most radical revamp in seven years—a Starbucks-style, high-end café.

“The new image is more friendly to them and they’re not just getting a cup of coffee and getting in the car,” says McNulty who has opened up seven stores in the last year, including units in Fort Myers and Marathon, FL. Comparable-store sales are up five to seven percent over last year, with the new image drawing in not just the usual loyal crowd, but also a new upscale clientele.

Dunkin’ stores were in need of some décor upgrading, according to a 2012 survey conducted by Nation’s Restaurant News and WD Partners. Dunkin’ Donuts tied for the second-lowest atmosphere score among beverage and snack shops, coming in below competitors such as Starbucks, Krispy Kreme, Caribou Coffee and Tim Hortons. 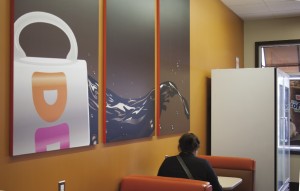 “Registering a better consumer impression is bound to occur after franchises debut the new looks for their restaurants,” says John A. Gordon, DDIFO restaurant analyst and principal and founder of Pacific Management Consulting, who noted that specialty-coffee and fast-casual segments promise higher sales and higher traffic. In the past two years, McDonald’s, Burger King and Wendy’s, among others, have all added more polished, urbane elements to its furnishings; Starbucks has says it will refurbish and improve cafes.

“Even the most successful brands must evolve to keep pace with changing consumer preferences,” says Gordon.

New and remodeled Dunkin’ Donuts restaurants featuring the brand’s new design schemes began rolling out nationally in April 2013. Franchisees have opened approximately 90 of the new stores with plans for as many as 600 by year-end, according to Bloomberg News, which reported the cost between $175,000 and $250,000 for a remodel and between $400,000 and $700,000 for new construction.

As older stores are ready for renovations – as dictated in the Franchise Agreements – franchisees will have to choose from one of four approved designs. “Our brand already has a very modern restaurant base, with the average image age being less than five years. And, our franchisees have completed more than 1,800 remodels in just the past four years,” according to John Costello, president of Global Marketing and Innovation at Dunkin’ Brands. Each Franchise Agreement includes a schedule for refurbishments after five years and remodels after ten years of a shop’s opening

Dunkin’s new design schemes – Original Blend, Cappuccino Blend, Dark Roast and Jazz Brew – feature layout and color scheme variations and options in textures, furniture and lighting. Many of the graphics are meant to reinforce the coffee theme, incorporating brown and tan shades that invite sipping and lingering. New digital menu boards, glass cases displaying croissants and other pastries, as well as more electric outlets for laptops and smartphones are designed to appeal to a professional business-orientated customer base. The trendy décor targets coffeehouse crowd who sits, sips, and surfs – and is more likely to buy a Bacon Ranch Chicken Sandwich and Vanilla Chai at 4 p.m. rather than just a chocolate glazed donut and small regular coffee at 6 a.m.

“Just as we’ve broadened our menu to meet our guests’ demand for more food and beverage choices they can enjoy any time of day, our new and innovative store design and atmosphere is just as ideal for people looking to sit down for a break or to relax with friends as it is for people rushing through a busy day,” Costello said during an event introducing the modernized design last summer.

David McNulty, the Florida franchisee, says his redesigned drive-thru signage and canopies have also improved drive-thru and take-out businesses. “An inviting exterior has helped the image throughout.” Customers are also responding positively to landscaping improvements and exterior menu boards, he added.

Gordon believes Dunkin’ Brands understands the importance of having its franchisees “buy into” the redesigns because they are the ones who pay for it. He suggests franchisees plan for a remodel several years in advance and set aside funds since the brand does not underwrite any of the investment. “Prioritize your stores; think about leveraging the new designs in stores with higher sales volumes; stores in more prominent locations; or where competitors in the same market area are getting a facelift,” he says.

The strategy seems to be working. A Dunkin’ store manager in downtown Chicago – across from a Starbucks – told Bloomberg News earlier this year, “We can compete with Starbucks now.” The manager reported the store serves about 50 customers during lunchtime now, compared with about 15 before it was remodeled.

As a reimaged Dunkin’s penetrate new markets west of the Mississippi with themes like Dark Roast and Jazz Brew, new customers will come to identify the look and feel of these establishments with the Dunkin’ brand. They won’t walk in and notice the redesign because this will be the image to which they are introduced. And that will be a positive asset, says Gordon.

“Consumers are becoming more discerning and we need to stay relevant, contemporary and fresh – hopefully that is what this new image will do for us.” •