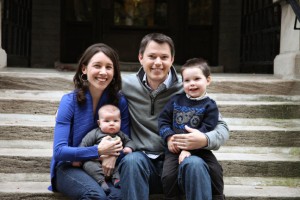 Bryce Bares with his wife, Sara, and their two children. The Nebraska native is opening his first Dunkin’ Donuts shop in the Omaha suburb Papillion.

Bares says he has felt welcomed into the Dunkin’ franchisee community, and that DDIFO has given him the opportunity to connect with  others in the business.

Bryce Bares is returning to his home state of Nebraska and he’s bringing Dunkin’ Donuts with him.

“Several DDIFO members have told me that there’s never been a better time to be with the brand, and I believe them. Dunkin’ has been running television ads in my territory and building brand recognition even before I signed on,” Bares said.

His first store is under construction in Papillion, a burgeoning suburb of 20,000 – and growing – about 20 minutes south west by car of Omaha.

But he’s set a goal of opening nine restaurants in the next five years. His territory includes part of Omaha, its southern suburbs, Lincoln (the state capital), and several rural communities along Interstate 80. Encouragement from friends and family, as well as several DDIFO members, has played a large role in his decision to put his experience as a practicing attorney to the entrepreneurial challenge of running a franchise operation.

“There’s a lot of buzz in Nebraska about Dunkin’s re-entry into the market,” he said.

Bares attended the Multi-Unit Franchising Conference last year and met former DDIFO Executive Director Jim Coen who introduced him to a number of experienced franchisees. Coen recommended Bares join DDIFO and attend last September’s National Conference at Mohegan Sun. Bares says he felt welcomed into the Dunkin’ franchisee community, and that DDIFO gave him the opportunity to connect with others in the business. He believes it will be an invaluable resource as he begins the process of launching his first shop.

Things are already in motion. The site is under construction and slated to open later this spring. Bares will attend Dunkin’ Brands University in February/March and then make the move from Chicago back to Nebraska. He’ll prepare the way for his wife, Sara, and two small sons to follow in June. “Sara is a physician who will be joining the faculty at University of Nebraska Medical Center in Omaha,” Bares said, but unlike him, she’s a native New Yorker. 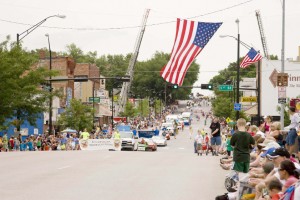 The Papillion Days Parade is a local tradition dating back to 1947. The annual June event is sponsored by the Papillion Community Foundation.

Omaha and its surrounding suburbs have been growing in recent years despite the recession, in part because of Offutt Air Force Base and that many multinational corporations set up regional headquarters in Omaha. They include Berkshire Hathaway, ConAgra Foods, and TD Ameritrade. Boston-based Fidelity Investments is building a $200 million data center in Papillion that is scheduled to come online in 2014.

Having so many transplants in the area is good for business because Dunkin’ is a known – and welcome – brand for many. And Bares is no exception. He developed what he calls a “healthy addiction” to Dunkin’ coffee while an undergrad at Amherst College in western Massachusetts and then as a law student at Boston College.

After earning his J.D. in 2004, he moved to Columbus, Ohio, to work as an attorney. He provided counsel on various facets of labor and employment law to businesses of all sizes, including several Fortune 500 companies and QSR chains. He then advanced to the role of corporate counsel serving as business advisor to a small software start-up, providing legal opinions of various industry issues. Columbus is a well-developed Dunkin’ market. But Bares had the entrepreneurial spirit. He moved to Chicago (another Dunkin’ stronghold) in 2006 and opened his own law firm, where he advised individuals and businesses in corporate formation, compliance, and employment law. He got noticed by city officials and was hired three years later as assistant corporation counsel for the City of Chicago’s Department of Law within its Finance and Economic Development Division.

“Working for municipal government and watching the planning and development process from the inside has helped me work with local governments in Nebraska. It taught me to reach out to municipalities early, and to show them how a development will benefit the community.

“While a new Dunkin’ Donuts may not mean much to Chicago in terms of economic impact, it means a lot to most of the communities in Nebraska. So far, we’ve been welcomed with open arms,” Bares said. 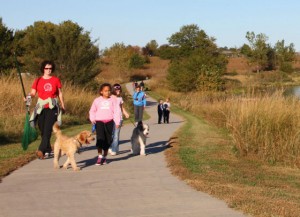 Walkers take advantage of one of Papillion’s many nature trails.

Nebraska has enjoyed a relatively low unemployment rate of around 3.7%, compared with other parts of the country, such as Chicago which hovers closer to 10%. Finding and retaining employees is one of Bares top concerns.

But his location in Papillion is a good one. There are nine colleges or universities within a 20-minute drive as well as a high school in close proximity. All are excellent sources for workers looking for part-time hours. So, too, are military spouses who are looking for supplemental income when they first relocate to Offutt Air Force Base. Each branch of the US military is represented among the approximately 10,000 military and federal employees assigned there. His store will be located in an endcap on a new four-bay strip center across the street from a major commercial development that will include a number of national chains.

In terms of the current competition, Bares believes his store will offer a better product and a better price point. Starbucks is in Nebraska. But so, too, is Scooter’s Coffee & Yogurt that opened its first store in Bares’ hometown of Bellevue, which borders Papillion. Offering drive-through service for coffee and smoothies, the franchise has expanded to more than 90 stores in seven states with the goal of exceeding the 100-store mark in the near future.

Having a brand with national name recognition, however, is a huge advantage, Bares said. It’s an advantage both from a hiring standpoint as well as welcoming in new customers who grew accustomed to Dunkin’ products where they used to live.

And then there are the old-timers from Nebraska who remember when Dunkin’ had presence there many years back.

“Even those who have never tried Dunkin’ Donuts know the brand. They are excited to try it. For those who tried the product back when Dunkin’ was in Omaha, it will be almost an entirely new experience with the expanded menu offerings and the refinement of operations over the last 20 years.” Bares’ parents still live in his hometown of Bellevue. “I still have many, many long-time friends in the area,” Bares said. “This is a community where reputation matters. Everyone knows each other.” 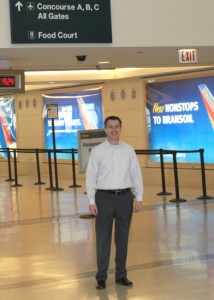 He imagines former teachers, teammates, and neighbors coming up to the counter. Bares said everyone has been very welcoming and enthusiastic about Dunkin’ coming and there has been a lot of cooperation from the town’s business and civic leaders.

David Black is the city’s mayor, though his full-time day job is at a local bank.

“I want Dunkin’ in Papillion,” Black said, adding that he remembers the brand from when he was a kid. “If you’re coming into Nebraska, I want you coming through Papillion.”

And he means it. When Atlanta-based Chick-fil-A was looking to enter the Nebraska market, it chose Papillion. Bares  Within three weeks of being open, that franchise owner was an integrated member of the community, Black said.

“We have a healthy business culture … [and] a high level of cooperation, trust, and support of residents for businesses here,” Black said. But the expectation goes both ways, he said. Business owners are expected to give back by going into the schools, helping with the food pantry, and overall “being a part of the community.”

It’s a tight-knit community, Black said, but welcoming to newcomers. “Business owners are part of the community and they are valued. Bryce is going to be part of that.”

Bares said he’s looking forward to it. “In Nebraska, both business and personal success are tied heavily to community involvement. Papillion is an amazing community, and we can’t wait to give back in whatever we way we can.”