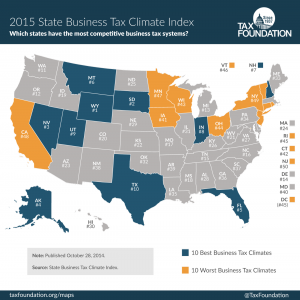 As our children prepare to celebrate Halloween this evening, businesses across the country are being subjected to the governmental version of tricks & treats, as well, depending upon the state within which they operate their businesses.  The Tax Foundation released their annual Tax Climate Index this week identifying states by their business-friendliness rating.  For the fourth year in a row, New Jersey, New York and California were identified as the three least business-friendly states in the nation, while Wisconsin continued its own four year streak as the most business-friendly.  Similarly, the rankings for the other states rounding out the top five (South Dakota, Nevada, Alaska and Florida) remained unchanged as well.  The Tax Climate Index is composed of over 100 variables in five important areas of taxation: corporate taxes, individual income taxes, sales taxes, unemployment insurance taxes and property taxes.  The biggest change over last year’s rankings belongs to North Carolina which improved 28 spots, due to the new tax policies (lower corporate and personal income taxes) adopted by the state earlier this year.  Nebraska improved its standing by five spots moving up to 29 on the list.  Conversely, Maine led the negative changes dropping five spots (due to 2014 increase in its sales tax) to 33 and was followed by Alabama, Kansas, Pennsylvania and Louisiana, all of which dropped three spots in overall ranking.  Interestingly, last week we reported on a different business-friendliness report that surveyed 356 executives to gauge a state’s business-friendliness.  California and New York were # 1 and 2 in that report as well!