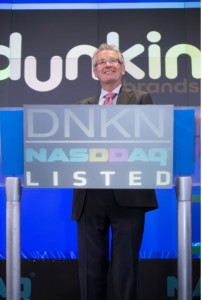 Writer Susan Adams had an interesting interview with Nigel Travis published this week in Forbes.  The interview focused on the Dunkin’ Chairman and CEO’s views on leadership in general, his growth and career in the business world and thoughts on moving DD forward.  In other Dunkin’-specific news, CFO Paul Carbone presented this past week at the Wells Fargo Conference but would not specify when the Dunkin’ loyalty program would be ready.  Initially, it was talked about for this 4th quarter, 2013, but that does not appear to be in play as a viable launch any longer.  He said the program will be tested more.